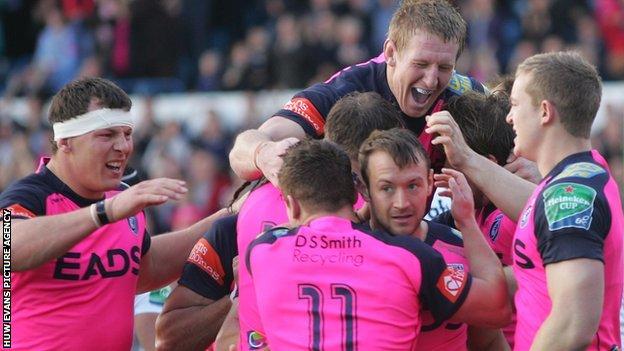 Cardiff Blues director of rugby Phil Davies has praised his side as "magnificent" and "superb" for beating Heineken Cup holders Toulon 19-15 a week after being hammered at Exeter.

"The players were magnificent, they fronted up superbly. It was a great win against a very good team," said Davies.

Jonny Wilkinson edged a kicking duel with Rhys Patchell and Leigh Halfpenny that gave the French side a 15-12 lead.

Davies had replaced Patchell as Wilkinson's last kick went over and finished off a move started by centre Cory Allen in style.

Wales and Lions star Halfpenny added the conversion and the Blues held out as Toulon launched a series of late attacks.

The scenes of celebration that followed were in stark contrast to those that were witnessed at Exeter, where Davies' side conceded five first-half tries.

Davies said: "We were disappointed with the first half last week, but we showed a lot of resilience in the second period to come back and get a bonus point.

"Physically and emotionally, the players went perhaps to another level today.

"I think that was the youngest back division that Cardiff Blues have ever put on the field.

"We are back in the group, which is the most important thing.

"It was great we got the result and it was great to hear the crowd singing. It was like the old days.

"We will keep moving forward and hopefully we can replicate more days like this one."