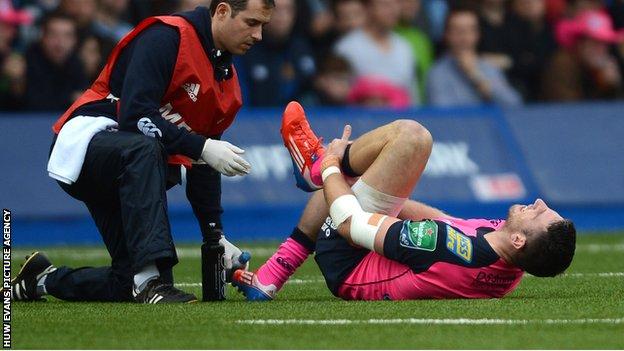 Wing Alex Cuthbert is a Wales injury worry ahead of the Autumn Tests after suffering an ankle injury in Cardiff Blues' win over Toulon.

Cuthbert picked up the injury after 18 minutes of the 19-15 Heineken Cup win.

The Lions wing continued until half-time but did not reappear for the second half and was seen leaving the Arms Park on crutches.

"His ankle's a bit sore so we've just got to assess him," Blues boss Phil Davies said.

Davies played down the injury and is confident 23-year-old Cuthbert would be available for Wales' November tests.

"[There's] no major damage apparently, just more of a knock than anything which he couldn't shake off so we brought him off," Davies added.

South Africa are Wales' first opponents at the Millennium Stadium on 9 November before Gatland's side face Argentina, Tonga and Australia.