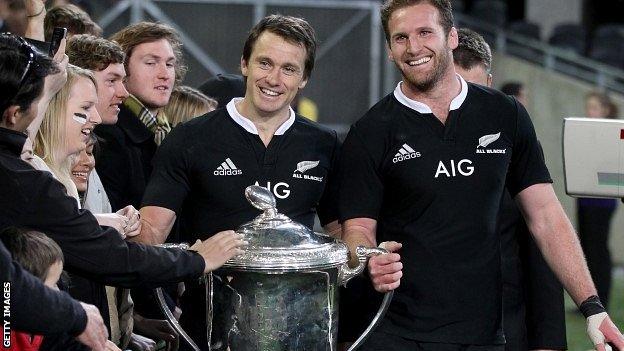 New Zealand coach Steve Hansen insists his side will remain grounded as they prepare for a tour that could see them stay unbeaten for an entire season.

The All Blacks could become the first nation in the professional era to go through a year with a 100% record.

The world champions have won all 10 Tests so far in 2013, winning the Rugby Championship title in the process.

"I don't think we've got any right to go around thumping our chests saying that we're unbeatable," Hansen said.

"We'll get our feet back on the ground and stay humble and keep working hard.

"We realise that if we don't, then others will come past us. That's not what we want."

New Zealand have only lost one of their 24 Tests since winning the 2011 World Cup, against England at Twickenham last November.

Hansen has included five uncapped players in a 36-man squad for the All Blacks' forthcoming four-Test tour, starting in Japan on 2 November before heading to Europe to face France, England and Ireland.

The versatile Whitelock, who will provide number eight cover for Kieran Read, could emulate older brothers Sam and George by becoming an All Black.

Bird and Perenara have both previously been named in All Blacks squads but injuries prevented them making Test debuts.

Moody, a Junior Commonwealth Games wrestling bronze medallist, is a relative novice, having only played Super Rugby for the first time this season.

With centre Conrad Smith unavailable while he takes a six-month sabbatical, Ryan Crotty - with only one Test under his belt - is included among the midfield options.

Wellington loose forward Ardie Savea, the younger brother of wing Julian, has been included as an 'apprentice' player for the tour to get a taste of the All Blacks environment.

The squad will be led by 120-Test veteran Richie McCaw, who along with eight other senior players will skip the Japan leg of the tour and head straight to Paris, where the All Blacks play France on 9 November.

New Zealand warmed up for their tour by beating Australia 41-33 in Dunedin on Saturday to wrap up a 3-0 whitewash in this year's Bledisloe Cup series.