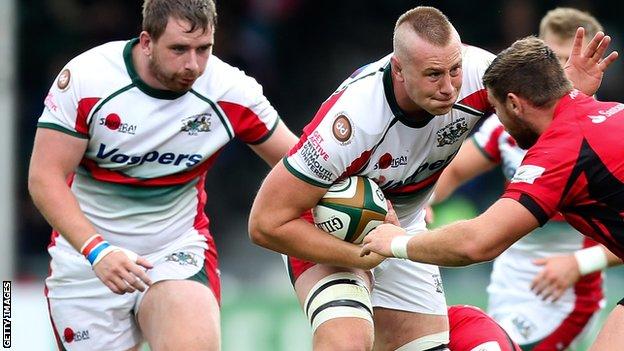 Plymouth Albion head coach James Shanahan has set his sights on a strong showing in the British & Irish Cup.

But Shanahan admitted it is a competition which English clubs have not always treated with respect.

"The Irish and Welsh teams take it seriously. Maybe some of the English clubs don't but I certainly am," Shanahan told BBC Radio Devon.

"We've got a big enough squad that guys need game time and opportunities, and maybe some of the guys who weren't in my thoughts are now.

"It's a great opportunity for me to look at the whole squad and makes selection very hard for next week.

"It's a game of rugby and I hate losing rugby games. No matter who we play, I want to win - whether it's a B&I game, a friendly or a league game.

"Why shouldn't we do well in this competition? Albion got to Twickenham a few years ago and it's a great competition."

Albion have home and away games against Munster to come and Shanahan said the outcome of those games would probably decide the group.

"Munster will be very strong," he said. "We've got them at home and it's a must-win game, then you go to Munster and dog it out and see what you get.

"If we can get five or six points from those games, then we'll be in strong contention to either win the pool or get a best runners-up spot, but we'll be going for the two wins."

Albion made eight changes for the trip to Scotland and Shanahan said he had been impressed with the performances that many of the recalled players put in.

"I've got a few selection headaches which is good for a coach," he added.

"I'd say there's probably 25-26 players in my thoughts and it's difficult to cut that down to 22 who will play against Jersey.

"They'll be hurting after the Sandy Park game [when Albion beat Jersey on the opening day of the season].

"But we haven't really fulfilled our potential for the last couple of games in the Championship, so we need to step up and get a result in Jersey."

Shanahan singled out the performance of his pack - particularly in the scrum - for the victory over Stirling, while the team's discipline also drew his praise after recent indiscretions.

"We started fairly slowly but after that we controlled the game with field position and good kick and chase, and the scrum really stepped up and gave us a massive platform," he said.

"I'm really pleased with our discipline, under 10 penalties for the third game in a row and no yellow cards - that's a big, big plus point."