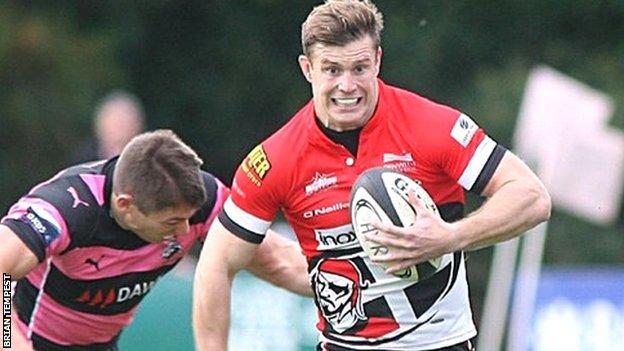 Cornish Pirates head coach Ian Davies has praised his side's professionalism after they secured a bonus-point win over Ayr in the British & Irish Cup.

The Pirates ran in eight tries in a comprehensive 53-10 victory in Scotland, a result which took them to the top of Pool Six.

"It's a fabulous start. We want to top the group to get a home quarter-final," he told BBC Radio Cornwall.

"We wanted to come to Scotland and do a professional job and I think we did."

Our set-piece dominance was there for all to see

Davies added: "We know the back-to-back games against Jersey will be huge.

"And then we have to go to Ravenhill in the last game of the pool stages against Ulster Ravens which won't be easy, so we have to do what we need to do in every game up to that point."

Davies was particularly pleased with the performance, given the inexperience of the side he sent out to take on the Scottish champions.

"Me and [assistant coach] Harvey Biljon were a bit nervous before the kick-off, purely because of the age of the players," he said.

"I think there were 13 players under the age of 23 and a lot hadn't played Championship rugby before, but I think they came through really, really well.

"We started well and camped in their half, but we just weren't controlling the ball.

"We were trying miracle off-loads but, as the half went on, our set-piece dominance was there for all to see and we got the rewards."

One of few disappointing aspects of the lengthy trip for Davies was a knee injury picked up by Aaron Carpenter, a Canada international.

"It's not good news for him with the autumn internationals coming up but we'll monitor it over the next few days," added Davies.

Meanwhile, the club have confirmed that several Championship home games have been switched to Sunday afternoons rather than Friday evenings.

The announcement follows the club's decision to abandon Friday night rugby in the wake of disappointing crowds.