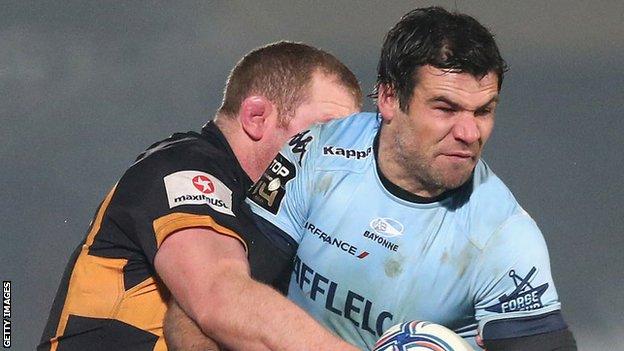 Wales coach Warren Gatland says he will not reprimand scrum-half Mike Phillips after allegations he turned up to a video analysis session at his club Bayonne under the influence of alcohol.

Phillips and two team-mates met the Bayonne board on Tuesday to give their side of events.

"We will sit down and have a quiet chat about where his head's at," said Gatland.

"But there are not going to be any sanctions for him here in this set up."

The Wales boss says any club sanction would be a "Bayonne decision".

Gatland added: "I can only speak of the last experience that we had with him with the Lions in Australia and he conducted himself extremely well on and off the field. I'm expecting that same sort of attitude when he's involved in this campaign.

"Obviously there are slight concerns about making sure this is something that is not repeated."

The alleged incident occurred the day after their 37-6 Amlin Challenge Cup win over Grenoble on Thursday, 10 October.

Bayonne confirmed a board meeting had taken place but they refused to reveal if any action had been taken against all three players.

The statement said: "Having met on Tuesday the players Stephen Brett, Mike Phillips and Dwayne Haare, the board of the Aviron Bayonnais Rugby Pro do not intend to communicate on the recent facts such as reported by the press.

"All the components of the club are turned to the next games to begin with the reception of Montpellier on Friday evening at the stadium Jean-Dauger."

The 31-year-old British and Irish Lions number nine was suspended by the club in 2012 for off-field misconduct.

Phillips was also suspended from the Wales squad in July 2011 following an incident in Cardiff city centre when he was involved in a confrontation with a doorman.

The 77-times capped former Scarlets, Cardiff Blues and Ospreys player joined Bayonne following the World Cup in the autumn of 2011.

He was a key member of the Lions team that beat Australia 2-1 in the Test series last summer, setting up the opening try for Alex Corbisiero in the decisive third Test match victory in Sydney.

New Zealanders Wayne Haare and Stephen Brett are the other players who will have to explain their actions to Bayonne board.