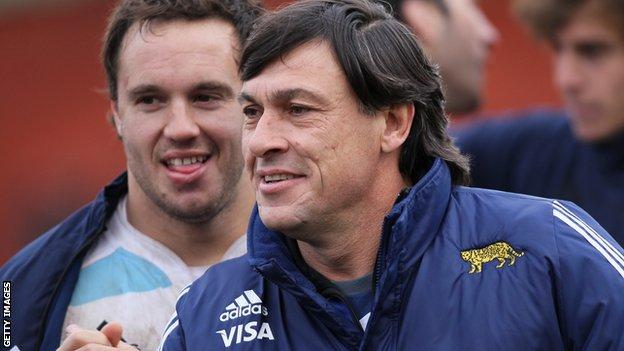 Daniel Hourcade has been named as the new Argentina head coach following the resignation of Santiago Phelan.

Hourcade steps up from the Argentina B team and will lead the Pumas in their November internationals against England, Wales and Italy.

Argentina won 13, drew one and lost 31 of the 45 matches under Phelan.

Argentina's first game under Phelan was the 21-15 first Test win over Scotland in Rosario in June 2008.

His final match was the 54-17 loss to Australia on 5 October in the Rugby Championship.

The Argentine Rugby Union (UAR) hopes Hourcade will stay on until the 2015 World Cup.

Phelan, 39, resigned earlier this week after five and a half years in charge.

His contract was scheduled to end in December but he brought forward his decision to leave after Argentina finished bottom of the Rugby Championship for the second year in succession - losing all six of their matches.

Argentina will face England at Twickenham on 9 November, Wales at the Millennium Stadium a week later and Italy in Rome on 23 November.