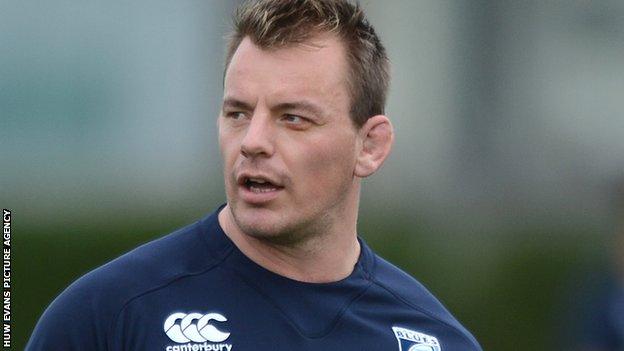 Former Wales captain Matthew Rees is to have "extensive treatment" for testicular cancer, his management company has confirmed.

He will begin treatment at Velindre Cancer Centre in Cardiff next week.

Cardiff Blues said in October the hooker, 32, faced a spell away from rugby and confirmed on Friday he was to undergo further medical treatment.

"Blues can now confirm that Rees will commence further treatment at Velindre Hospital, Cardiff from next week as he targets a return to playing in the future," said a club statement.

"Matthew has asked the region to pass on his sincere gratitude for the many messages he has received from well-wishers over the last two weeks, and to thank the media for respecting his privacy at this time.

"The region will continue to support Matthew and his family in every way possible throughout this period and we look forward to his return to rugby in the future."

Appealing for charity donations for the cancer centre, the management company added: "We would be grateful for any support that you could give to Matt during this difficult time and are aiming to reach out to everyone who has played with or against, supported or knows Matt."

Rees, who has won 58 caps, made his Wales debut in 2005 and became a British and Irish Lions Test player on the 2009 South Africa tour.

He skippered Wales during the 2011 Six Nations Championship, but missed the World Cup in New Zealand later that year due to a neck injury.

The ex-British and Irish Lions hooker, who joined Blues from Scarlets in the summer, will initially miss Friday's RaboDirect Pro12 trip to Ulster.

Tonyrefail-born Rees was a late withdrawal from the Blues team ahead of their 19-15 Heineken Cup win over Toulon on 19 October.

He played 182 times for the Scarlets after joining the region in the 2004-05 season and was famously part of the all-Welsh front row, along with props Gethin Jenkins and Adam Jones, for the three Lions Tests against South Africa in June 2009.

Rees previously played for Treorchy, Pontypridd and the now defunct Celtic Warriors and became Wales' 128th captain when given the role against Australia in November 2010.

But he struggled to hold down a first-team place at Parc y Scarlets after missing out on Wales' World Cup campaign in 2011 through injury and departed for Cardiff at the end of last season.