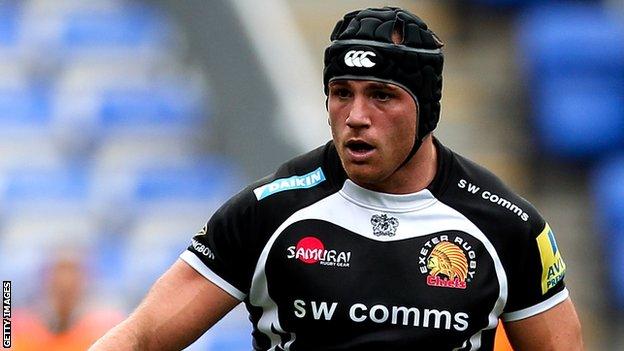 Exeter Chiefs ensured there was to be no upset at Sandy Park as they brushed aside winless Worcester 40-6.

Exeter led 14-6 at the break after first-half tries by the Australian duo of Ben White and skipper Dean Mumm.

The home side then ran away with it in the second half with tries from Phil Dollman, Damian Welch, Haydn Thomas and a second for White.

Exeter moved up into the last of the Premiership play-off spots following the demolition of a Warriors side who remain rooted to the bottom of the table.

Playing into a stiff breeze, it took the home side just five minutes to cross the line as White barged over from close range, following drives from prop Brett Sturgess and centre Sam Hill.

It's the fourth time this season that Australians Ben White and Dean Mumm have both scored tries in the same game and the Chiefs have gone on to win each time they do.

From the resultant kick-off, the Chiefs conceded a penalty that allowed Mieres to cut the deficit.

However, the Argentine was at fault for Exeter's second try, as Dollman shrugged off his weak tackle before linking up with half-backs Dave Lewis and Gareth Steenson, and the fly-half sent skipper Mumm over for his fifth try of the season.

Worcester did show ambition, turning down several shots at goal in favour of kicks to the corner, but time and again they were repelled by a Chiefs defence led by the ubiquitous Tom Johnson.

The second half was one-way traffic with man-of-the-match White again opening the scoring, having charged down Jonny Arr's clearance kick.

And the bonus point was in the bag just before the hour, when Dollman was given a clear run at the line following a break from Johnson.

Steenson added the extras to all four tries before making way for former England Under-20 fly-half Henry Slade.

The home side were now rampant and this time White turned provider, feeding second row Welch for his first of the season.

Slade missed the conversion but more than made amends for it minutes later when his jinking break opened up the Warriors defence once again.

The youngster had Johnson on one shoulder and Thomas on the other, and it was the scrum-half who was to benefit and cross to complete the rout.

"The defensive display in that first half was absolutely vital into that wind, to hold them out to no tries was a phenomenal effort.

"Rob (Baxter, head coach) had been putting a lot of time into the defence and it is coming through really well. We have an exciting attack.

"That was our first bonus point of any sort in the league so that is pleasing.

"It is the unseen work that we have really been banging on about and if we create quick ball we are a good side."

"He (Johnson) has been right on form and also the good thing is that we are an in-form side so hopefully it gives TJ that platform to push on in the international scene.

"As far as I am concerned he (Johnson) has been going fantastically well - he's been carrying well, got good pace about him and he has been aggressive in defence."

"Relegation is not part of the conversation and I don't see why it should be.

"It doesn't mean that we don't recognise the hole that we are in, but there are still 16 games left and it is only a seven-point split.

"If anyone feels that we are missing a point or can see the answer, then please let me know.

"We have three players that have only been with us for a week and we are nearly in November. To be talking about relegation is pretty poor.

"I have a huge amount of admiration about how hard the guys threw themselves into the game.

"There are some areas that I thought had improved and there is also some clarity about what we need to do.

"I thought elements in this game were outstanding. The reality of it is that we are short of the work culture that they have here at Exeter and other Premiership sides have."