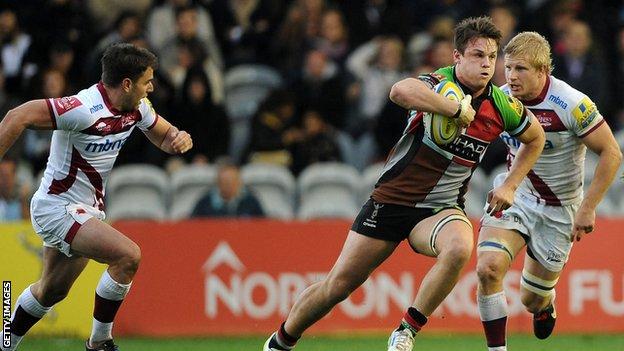 Harlequins ended their four-match losing run with a workmanlike victory over Sale Sharks at the Stoop.

Quins led 9-3 at the break thanks to three penalties from Ben Botica, with Danny Cipriani replying for Sale.

In the second half, the home side increased their lead when flanker Luke Wallace finished off a superb team try before Botica added another penalty.

The second-half dominance was rewarded when replacement Jack Clifford scored late on to seal the win.

Harlequins, without the services of England players Chris Robshaw, Mike Brown and Joe Marler, were nowhere near their best, but did enough to leapfrog their opponents into sixth place in the table.

There was parity in the forward exchanges, but it was behind the scrum where Quins held the edge, and in truth, the visitors offered very little in attack.

Cipriani cancelled out an early Botica penalty with one of his own, but it was the only highlight in an error-strewn performance from the visiting fly-half.

Home skipper Nick Easter came close to scoring the first try of the afternoon, but he was adjudged to have been held up over the line by a fine tackle from former Wales scrum-half Dwayne Peel.

Six minutes before the interval, Quins were dealt a blow when number eight Tom Guest was carried off on a stretcher and replaced by Jack Clifford.

But it was the introduction of Danny Care after the break that sparked the home side into action.

The opening try was a team effort; Easter made the initial break before Botica fed Clifford and when the ball came back to Nick Evans, his cross-field kick was gratefully received by Wallace to cross in the corner.

Botica's conversion from wide out hit the post but he was able to make amends minutes later with a penalty after Mark Cueto impeded Wallace trying to repeat the trick.

Cipriani made way for Joe Ford as Sale made a raft of changes, but the replacement's clearance kick was charged down by Clifford and the former England Under-20 captain raced in to clinch victory.

"We controlled huge chunks of the game and the win allows us to stay in the mix.

"The game is always challenging but you have to have belief in your young players.

"Luke Wallace, Jack Clifford and Joe Trayfoot played the whole of the second half and it was a huge learning curve for them but they will have learnt so much today.

"I would have expected them to be our back row in four years time not today as they have been thrown in at the deep end because of injuries.

"Tom (Guest) has gone to A and E but hopefully as a precaution. He has a head injury and had pins and needles but before going to hospital, the feeling was returning so hopefully he will be okay."

"We made too many basic errors with most of the fifty-fifty calls went their way.

"A couple of penalties were a bit harsh and Luke Wallace was definitely offside when he collected the ball for the crucial try."