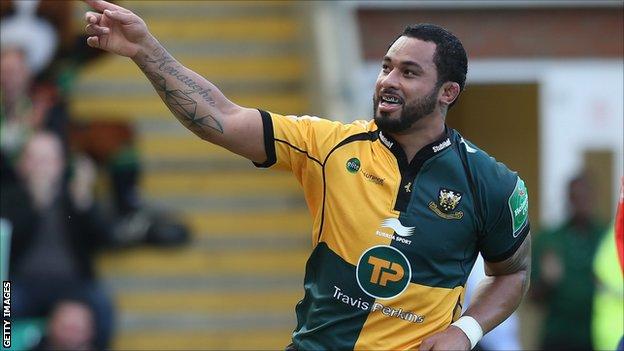 Northampton sealed a bonus-point victory over Premiership leaders Saracens with two tries from Ben Foden and one each from Jamie Elliott, Samu Manoa, Luther Burrell and Ken Pisi.

Saints led 17-6 at the break with tries from Elliott and Manoa, with Alex Goode kicking two penalties for Saracens.

A brace from Foden sealed the bonus point before Duncan Taylor replied.

It was an emphatic victory for Saints, who inflicted Saracens' heaviest defeat in four and a half years.

Defeat for Saracens was their heaviest loss in four and a half years.

Stephen Myler and Goode traded penalties early on but from there on in it was Northampton who dominated.

Elliott was first to cross, finishing off a fine team move by Saints, created by Manoa.

Myler missed the conversion and Goode had a chance to reply, but was held up over the line, wasting an overlap at the same time.

Goode was made to rue that miss after being embarrassed by Manoa, who crossed under the posts after a superb side-step and a drive left the Saracens man on the turf.

The full-back's afternoon got worse with a missed penalty, but he did eventually reduce the deficit with an effort from the tee before the break.

Saints had their third try of the game shortly after the restart through Foden.

And Foden soon sealed the bonus point with his brace, racing on to Myler's grubber kick before grounding the ball. Myler added the conversion to extend the lead to 29-6.

Taylor went over for Saracens with Goode converting to give them some hope.

But Saints came firing back through Burrell, who scored under the posts after quick hands from George Pisi and his brother Ken, with Myler converting.

Saracens had their second converted try when Brown bundled over after a driving maul, but Northampton had the final say with Myler's superb pass releasing James Wilson who fed Ken Pisi to dive over in the corner.

"To score 40-odd points against Saracens is pleasing.

"You never quite know beforehand how teams will react to having players missing, but it was pleasing for us that it was such a good squad effort.

"Our pack played well, our set piece was good and we combined that by moving the ball at the right time. We were clinical with some of our tries."

Saracens director of rugby Mark McCall: "They were outstanding. When you come down here you have to get the foundations of your game right and their set piece was well on top.

"All the pressure they exerted came from there. Our set piece was poor and they scored too easily. We made a lot of individual areas which proved costly.

"This team hasn't lost two games in a row all that often, although it has happened in the last couple of years

"The two performances have been very different - we could have won against Toulouse in a high standard performance in a close game.

"But we were beaten in every way by a Saints team that was red hot, although we didn't help ourselves. They were much better than us today."