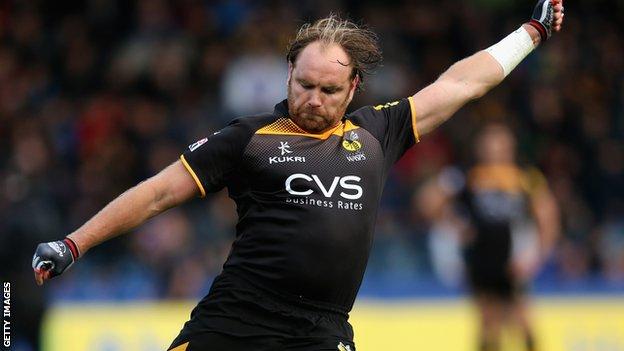 Wasps held strong to climb from 11th to ninth, while Leicester, who last won at Adams Park in 2007, stay fifth.

Andy Goode scored his first Premiership points for Leicester in September 1999. He now has 1,897

Richard Cockerill, back in charge of Leicester after a nine-game match-day ban, saw his side unable to breakdown an organised and committed Wasps defence after the hosts' early score.

Fly-half Goode, who won five Premiership titles and two Heineken Cup medals during two spells with the Tigers, was central to most of Wasps' good work amid blustery and wet conditions.

And it was the former England number 10's burst into Leicester territory that instigated the only try of the game.

Wasps went through the phases after Goode had broken through the line and Chris Bell applied the final looping pass to allow Wade, in the side after being to cross.

The game became a battle of the boots for the rest of the first half with Goode, who had already converted Wade's try, showing his precise kicking to slot two penalties and Welshman Williams, making his first Tigers start in the absence of England call-up Toby Flood, landing three of his own.

Trailing 13-9, the expected Leicester response came after the break, pushing back Wasps and drawing Dai Young's side into a series of infringements that eventually saw Festuccia sin-binned.

Despite a surge of Tigers pressure, Wasps not only defended staunchly, but landed two drop goals through Goode to come out six points better off while a man down.

Leicester continued to see plenty of ball in the Wasps 22, but their frustration at a lack of a breakthrough was summed up when Williams hurriedly belted a drop goal wide of the posts.

Williams brushed himself off to score from the tee and bring Leicester within a converted try of levelling up with 12 minutes to go.

But any hopes of mounting a comeback - and securing a losing bonus point - were scuppered when Goode used the wind to his advantage to land a superb long-distance penalty.

"Andy was outstanding as he steered the ship and kicked the important goals.

"A lot of people have knocked him this season but he showed today why I wanted him to join us.

"I never thought the game was safe until three or four minutes from the end. We made it difficult for ourselves in the second half as we allowed them to gain field position.

"Our defence for the 10 minutes that we were down to 14 men, when Carlo Festuccia was sin-binned, was crucial and the difference between winning and losing."

"We are disappointed; it was a pretty ordinary game with error after error.

"The weather conditions were difficult but we missed crucial kicks and we went to sleep for their try.

"These things cost you and our performance was below average.

"We have the whole of our first-choice back-line out and a number of key forwards but we came with a side that should have played better.

"It wasn't a disgrace but I expected a little bit better than that."