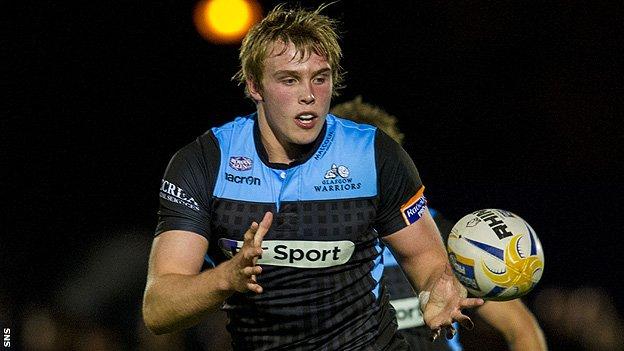 Scott Johnson says he has picked a training squad for the autumn internationals with the 2015 Rugby World Cup in mind.

The interim Scotland head coach has named five uncapped players in his 41-man squad for the games against Japan, South Africa and Australia next month.

"We want to continue building a depth to the squad," he told BBC Scotland at Murrayfield.

"I have a duty of care to do that 24 months out from the World Cup."

They've been consistent, which is often a challenge for younger players, and they've shown the resolve to get better

Mark Bennett, Jonny Gray and Chris Fusaro have been rewarded for Glasgow Warriors' impressive start to the season with a call-up for next week's training sessions in Glasgow ahead of the three Tests.

And London Irish back-row pair Kieran Low, 22, and Blair Cowan, 27, are also called up as they, too, hope to win their first caps.

"I've been impressed with what I've seen from Mark Bennett and Jonny Gray," added Johnson.

"They've been consistent, which is often a challenge for younger players, and they've shown the resolve to get better."

Bennett, Gray and Fusaro are just three of 18 Warriors to make the squad, which also features 10 players from Edinburgh and 13 players from England, France and Wales.

Johnson, who has surprisingly left out the Glasgow flanker Tyrone Holmes after his man-of-the-match performance in the Heineken Cup last Sunday, said he has had no contact from fly-half despite calling him on Monday morning.

Allan has represented Scotland at age-grade level but is in the Italy training squad for their November Tests.