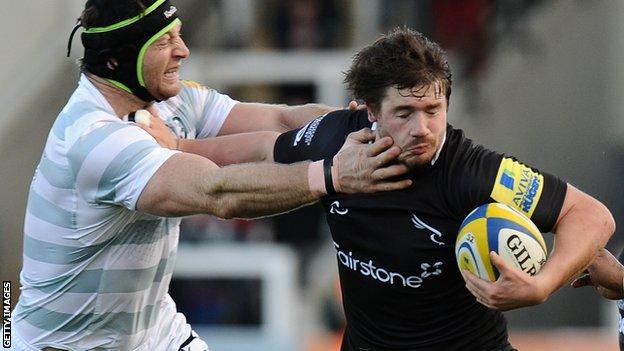 Ofisa Treviranus put the visitors in front by finishing a swift move, before Rory Clegg hit back with a pair of Newcastle penalties.

Ian Humphreys scored from the tee either side of half-time to open up a five-point gap in the Exiles' favour.

But Powell's try and Phil Godman's conversion were enough to sneak Falcons home and above Irish in the table.

Powell off the mark

England Saxons centre Adam Powell's try was his first for Newcastle in the Premiership, after leaving Saracens in March

The late drama rescued an otherwise scrappy encounter, hindered by handling errors from two sides at the bottom end of the table.

Both teams had secured just two Premiership wins coming into the fixture and Newcastle's nervous fight to hold on at the end suggested there is little to separate the pair.

The Exiles worked the ball well down the left flank to supply Treviranus for the opening points, although Humphreys failed to make the conversion attempt.

But Clegg, who had squandered an earlier chance from the tee, succeeded with a second attempt before Irish were fortunate not to see Chris Hala'ufia yellow carded for a late tackle on Powell.

Clegg did get the chance to pick up a further three points from the incident, which he duly took, only for Humphreys to hit one of his own to regain the Irish lead at the break.

Neither side improved on their handling skills in the second half, the visitors once again turning to Humphreys' boot to keep the scoreboard ticking over.

But the five-point lead proved insufficient as Falcons camped in the Irish 22 and crossed when Powell collected the ball in acres of space, with Godman kicking the extras.

Exiles fly-half Shane Geraghty, on as a substitute, missed a last-gasp penalty in a tense finale, as Newcastle held on to move up to eighth and leave their 10th-placed opponents with just a losing bonus point.