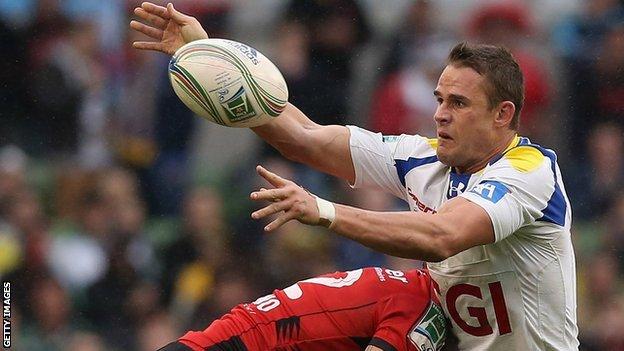 Clermont Auvergne full-back Lee Byrne says Wales coach Warren Gatland has not picked players on form or ability but with an eye to the 2015 World Cup.

The former Llanelli, Scarlets and Ospreys player, a 2008 Grand Slam winner, last played for Wales in 2011.

He tweeted: "Gutted to be overlooked by Wales again obviously squad was picked on blooding players for WC not on form or playing ability."

Byrne was recalled to the squad when Robert Howley deputised for absent British and Irish Lions boss Gatland during the 2013 Six Nations.

However, he did not play as Wales successfully retained their title.

Along with utility back James Hook, utility forward Ryan Jones and prop Paul James, Byrne was one of the experienced players overlooked for Wales' June 2013 Test series against Japan, which finished 1-1.

Recalled Perpignan star Hook has played largely as the last line of defence for his club this season and was named among Wales' centres in the autumn squad.

Wales' series kicks off against South Africa on 9 November, continuing against Argentina on 16 November, Tonga the following Friday, and against Australia eight days later on 30 November.