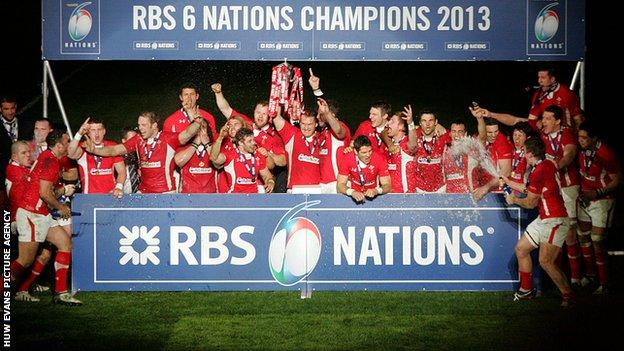 He is intent on using the four games against South Africa, Tonga, Argentina and Australia to build for February.

Gatland has named a 35-man squad, including three uncapped players.

"The last thing I would want is to win the four games in the autumn and then finish fourth or fifth in the Six Nations," said the New Zealander.

It's making sure that mentally we are right when it comes to the business end of the season - that's the Six Nations, and that tournament is so important to us

"The most important tournament is obviously the Six Nations.

"We have got to make sure we are right for that because that's the competition that is most important for us."

Gatland is conscious that having 15 players initially selected on the victorious British and Irish Lions tour to Australia might have taken its toll mentally.

He says there is evidence that after Lions tours France benefit in the Six Nations Championship.

History also suggests that the country supplying the most Lions representatives struggles in the subsequent Six Nations. with Grand Slams.

"It's making sure that mentally we are right when it comes to the business end of the season - that's the Six Nations, and that tournament is so important to us.

"When the weather starts getting cold and miserable out there we have got to mentally keep these players as fresh as we possibly can.

"If you look at previous Lions tours, France have been the team who have tended to have won post-Lions in the Six Nations, and the nation that is usually heavily represented tends to struggle.

"[In Wales] it's just an accumulation of not just the last 12 months, but the last 18 months or two years.

"For all of us it's being aware of that, making sure we manage our players really effectively."

But Gatland is still intent on making a mark in the autumn, starting with a good performance against the Springboks on 9 November.

"[We will try] to put very strong sides against South Africa, Australia and Argentina and perhaps give one or two of those less-experienced players an opportunity in the Tonga game.

"We have done well in campaigns, whether it's a World Cup or a Six Nations, but at times we haven't performed as well as we would have liked against some of the south hemisphere teams.

"I think the nice thing is that South Africa - the information coming to us - is that they would have liked us later in the autumn campaign.

"I think it's a sign of respect in particular with the talent in the squad that we have.

"But it's important for us to hit the ground running and hopefully start the autumn off with a good performance and a good result."