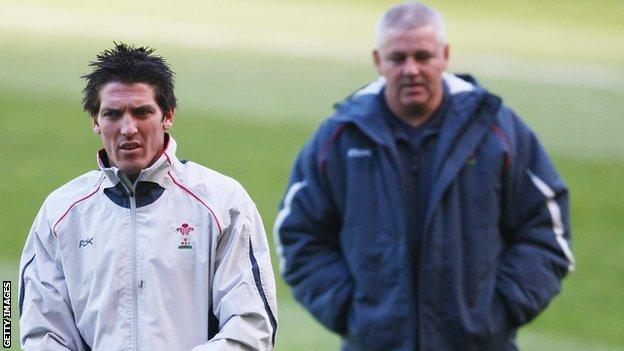 The Wales coach is "frustrated" by Hook's Perpignan contract denying the player full release for internationals.

But Northampton wing North, is already in Wales' camp ahead of four November Tests.

"That was part of the terms and conditions when he signed," said Gatland of North.

"He wasn't going anywhere unless he had at least the same release as the Welsh [based] players.

However, Gatland is less impressed by the deal Hook as

Gatland also revealed Wales have released Bath prop Paul James' from the match against Tonga in return for the club releasing the player for the Test against Australia on 30 November.

And the Welsh Rugby Union's policy of holding regular out-of-window games has seen other non-Welsh-based players miss out in the past.

Hook left Ospreys ahead of the 2011-12 season and has recently signed a fresh four-year deal with French Top 14 club Perpignan.

He added: "It does make a difference having that couple of weeks' preparation and them being available for that fourth game in the autumn.

"There are one or two that don't have full release and that's sometimes not always easiest when they come a bit late and you're looking at the team trying to put some combinations together.

Gatland says Hook is "desperate and hungry to play for Wales".

The New Zealander added that when Hook was considering moving to France, he told the player to ensure he had full release for all of Wales' training and playing commitments.

Gatland continued: "Unfortunately we were under the impression that his agent had negotiated that, so I'm disappointed that that wasn't done with his agent and other players have been able to do that.

"With James not being fully available for all training for all the Six Nations and missing that fourth game in the autumn, it puts him at a disadvantage to other players that are available all the time."

However, in North's case Gatland says Wales have been told the British and Irish Lions wing is fully available to them.

"It's what we've been told - he's down here training this week; they [Northampton] actually released him a week earlier.

"So he's training with us so he's got full release."

The WRU and the leading English clubs' umbrella body Premier Rugby Limited have clashed over player-release issues in the past.