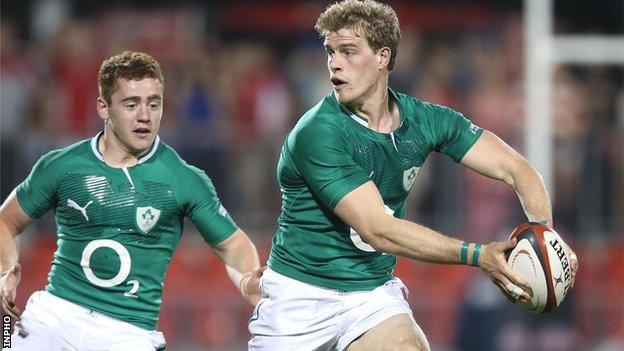 Andrew Trimble has missed out on a place in Ireland's squad for the November games against Samoa, Australia and New Zealand at the Aviva Stadium.

Munster lock Ryan will be out until the New Year after suffering ligament damage in last weekend's Heineken Cup win over Gloucester while Ulster forward Henderson's toe injury is expected to rule him out for up to six weeks.

Despite the unavailability of injured Simon Zebo, Trimble misses out for the wing spots with David Kearney included along with Tommy Bowe, Keith Earls and Fergus McFadden.

Trimble, who celebrated his 29th birthday on Sunday, was omitted from Ireland's Six Nations squad earlier this year despite producing some outstanding form for Ulster and Wednesday's news will be a further blow for the wing.

His Ulster colleague Court is preferred to Munster's Dave Kilcoyne for one of the loose-head prop berths with regular starter Cian Healy and young Leinster player Jack McGrath also included.

Richardt Strauss is absent because of the heart problem which will cause him to miss the remainder of this season while other notable omissions include Munster's 94-times capped lock Donncha O'Callaghan.

O'Callaghan, 34, is left out despite the unavailability of his injured Munster colleague Ryan and there will be inevitable speculation that the former Lions player's international career could be over.

With the two Munster locks missing, Leinster pair Mike McCarthy and Devin Toner and Ulster's Dan Tuohy will be the contenders to partner Paul O'Connell in the second row.

Others dropping out from the training squad which got together last month are Luke Fitzgerald, Shane Jennings and Leicester's Niall Morris.

Craig Gilroy was among players unavailable because of injury which also includes Stephen Ferris, Tommy O'Donnell and Jordi Murphy.

"The squad combines players who have shown form in the domestic season mixed with those who have a proven record at international level," said Irish coach Schmidt.

"As always there were some very difficult decisions. Some players have had limited opportunity to impress due to injury and others have performed very well and it was difficult to leave them out.

"The series will demand plenty from the squad and I know they'll be motivated by the challenge."

Schmidt has yet to indicate who will captain the Irish in the autumn games.