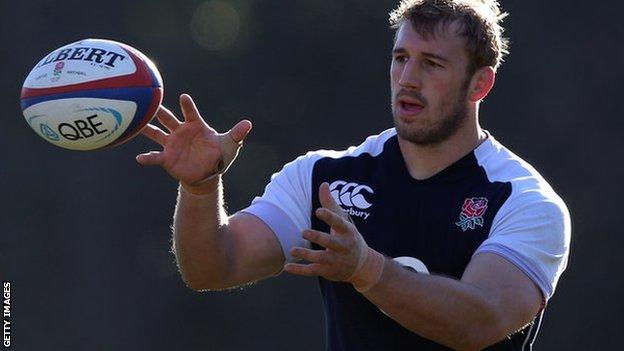 Harlequins flanker Chris Robshaw will resume the England captaincy in their forthcoming autumn Tests after holding off the challenge of Tom Wood.

Robshaw, 27, first led England against Scotland in February 2012 and continued in the role for 16 Tests.

But having missed out on a British & Irish Lions place, he was rested for this summer's Argentina tour, when fellow back-rower Wood took over.

But head coach Stuart Lancaster has decided to stick with Robshaw.

The decision means he is likely to remain at open-side flanker for the matches against Australia, Argentina and New Zealand.

"Chris has shown throughout the season he is in great form and his experience meant it was a pretty straightforward decision," Lancaster said.

"My priority has always been to decide the captain on form and fitness. We want a broad leadership group but when it came down to it, Chris was the standout person to captain the side."

A year ago both Lancaster and Robshaw enjoyed their finest hour in the shock victory over the All Blacks at Twickenham.

The uncertain form of his club side Harlequins had led to speculation that Robshaw may even struggle to reclaim a place in the starting team.

But with his main rival for the number seven shirt, Gloucester's Matt Kvesic, also playing in a struggling side, he has won the battle for both his place and leadership role.

"I am extremely honoured to continue in the role," said Robshaw, who was informed of the decision after a one-on-one chat with Lancaster on Monday.

"I have never done this job on my own, there has been a core group around me and that continues as well.

"Tom [Wood] has been very supportive in it all. We have a very good relationship in how we push each other and work hard. We all have the same goal.

"We want to win and be in the best position for [the] 2015 [World Cup], whether it is me leading or other guys, it is about that core group."

With Lancaster expected to give Saracens' Billy Vunipola a first start at number eight against Australia on 2 November, the likely inclusion of Wood and Robshaw in the other two back-row positions gives England significant experience for the southern hemisphere tests ahead.

Lancaster is "pretty optimistic" that Wood's Northampton team-mate Dylan Hartley will be fit to face the Wallabies next week despite the hooker having his foot in a plastic boot after turning his ankle over playing for Saints in their Heineken Cup win over Ospreys on Sunday.

Bath prop David Wilson has also also yet to train with the squad at their Leeds base this week and is receiving ongoing treatment for a tight calf.

Gloucester's uncapped centre Henry Trinder, a contender to make his debut against Australia, is "progressing well" with a hamstring strain and could return to training on Thursday.

But prop Alex Corbisiero remains a doubt for the Wallabies Test as he continues with "off-field" rehabilitation from a knee injury.