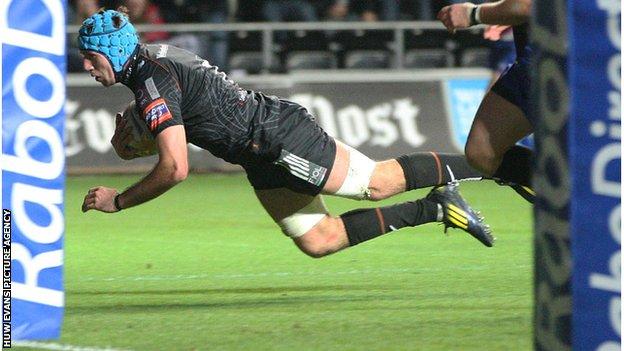 A penalty try and a touchdown for Scott Baldwin earned the Ospreys a bonus point, with Dan Biggar contributing 17 points with the boot.

Tom Prydie and Francisco Chaparro crossed for the Dragons with Kris Burton converting and dropping a goal.

But there was concern for Wales after Dragons number eight Toby Faletau was carried off with a neck injury.

Faletau was injured as he tackled Ospreys wing Eli Walker early in the second half.

There was a 10-minute delay as medical staff attended to the Lions back row forward, and he was carried off on a stretcher with his neck and back braced before being taken to Swansea's Morriston Hospital for assessment.

The Ospreys already had the game under control before the incident, with open-side Tipuric delivering a virtuoso performance.

The result ended a run of three consecutive defeats for the Swansea-based region, who are bottom of their Heineken Cup qualifying pool after losing to Leinster and Northampton.

But there was little hangover from those performances as the Ospreys pack dominated.

The Dragons had made a flying start, crossing for a try in the first three minutes courtesy of some good play and a slice of luck.

Skipper Andrew Coombs benefitting from a ricochet off the heel of Tom Habberfield before feeding Prydie, who scored wide on the right hand side. Burton converted.

The home team recovered from the early set-back with their pack taking control before Biggar's first penalty got them on the scoreboard.

Biggar was playing at full-back in place of the injured Richard Fussell, with Matthew Morgan filling in at fly-half.

Morgan made his presence felt as he sprinted 50 yards past a splintered Dragons defence, off-loading to Tipuric - who juggled the ball before crossing between the posts.

Referee Nigel Owens was officiating in his 100th match in the Celtic League, and was presented with a gold whistle to mark the occasion.

Biggar converted and added two penalties before the interval, though the Ospreys' lack of control at key moments meant the six-point half-time lead was scant reward for their dominance after Burton had dropped a goal.

A 10-point burst at the start of the second half put the game beyond the Dragons.

Morgan dropped a goal and then Tipuric was put clear from a lineout by Habberfield and chipped the ball over full-back Dan Evans before gathering and sprinting in for a superb individual try, which Biggar converted.

The injury to Faletau and a yellow card for replacement Ieuan Jones further disrupted the Dragons, whose seven-man scrum was shunted backwards before Lewis Evans infringed to concede a penalty try, with Biggar adding the conversion.

Scott Baldwin delivered the bonus point when he sneaked over from a rolling maul, and Chaparro's late try was a consolation for the Dragons, who were comprehensively out-played.