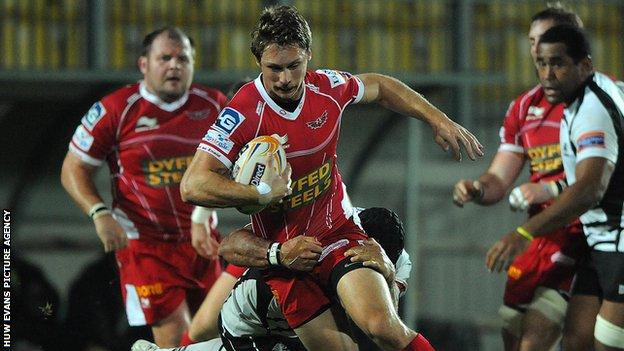 A late penalty from Rhys Priestland rescued a draw for Scarlets in their Pro12 game away to Zebre on Friday.

The Italians had led 10-3 thanks to Gonzalo Garcia's try and the kicking of Tommaso Iannone.

But Scarlets hit back to level before half-time as scrum-half Gareth Davies went over under the posts.

Zebre inched ahead twice more through Iannone and Luciano Orquera kicks but Priestland, on at fly-half for Steve Shingler, drew Scarlets back each time.

The match was Scarlets' second successive draw after being last weekend in the Heineken Cup.

Scarlets took the lead through a penalty from Shingler - given the starting spot at fly-half in place of Priestland - just four minutes in.

But the home side went ahead as Italy international Garcia crossed over with a well-finished try after 15 minutes, to which Iannone added a conversion.

Iannone put Zebre further ahead with a penalty midway through the first half to atone for an earlier missed effort.

The Scarlets hit back with a try of their own through half-back Davies approaching the half-hour mark and Shingler added the extras for a 10-10 half-time score.

Both sides took a while to get going after the break and Scarlets coach Simon Easterby brought Priestland off the bench along with Sione Timani and Wales international Rhodri Williams in a bid to get more points on the board.

But it was the home side that went ahead as Iannone struck his second penalty of the match after 66 minutes.

Priestland levelled matters seven minutes later before Orquera thought he had won it for Zebre - only for Priestland's last-minute equaliser.