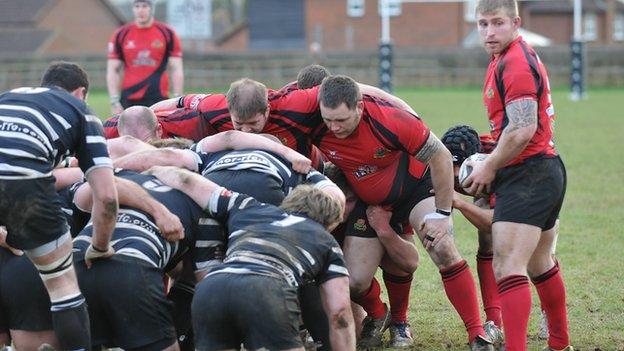 Morcom said his players had learned lessons from last season's 16-14 defeat in Bristol.

"We went there when the weather wasn't good and we thought it would play in to our hands. But they had a very good kicker and that won them the game.

"We're going there with the mentality of trying to score some points," he told BBC Radio Cornwall.

"Hopefully we can unleash some try-scoring opportunities and this weekend it'll be the other way around."

Redruth beat Exmouth 26-14 at home last weekend, but are still looking for their first away win of the season after defeats by Launceston, Chinnor and Bournemouth.

Morcom admitted that getting a victory on the road is now a real priority, and they will be boosted for the game against Dings by the return of first-choice number eight Matt O'Leary.

"Probably the most important thing is to follow up with an away victory," he said.

"We're good at home, we always seem to get the results there but now we've got to start backing them up with away performances.

"We played some really good rugby away at Bournemouth but on the day it wasn't mean to be. Dings are in a similar situation of winning nearly everything at home and we've got to go there and try to spoilt their party."

Despite the 12-point margin against Exmouth, Morcom said the match was closer than the scoreline suggested.

"We got the job done. It was a bit nerve-racking at times and we didn't play to our full potential. But in the end our experience showed and we got the five points, which is the most important thing.

"For a neutral spectator I expect it's a very good game of rugby at the Rec at the minute: for the head coach of Redruth it's not so good. It's very stressful and I'm aging a lot!"