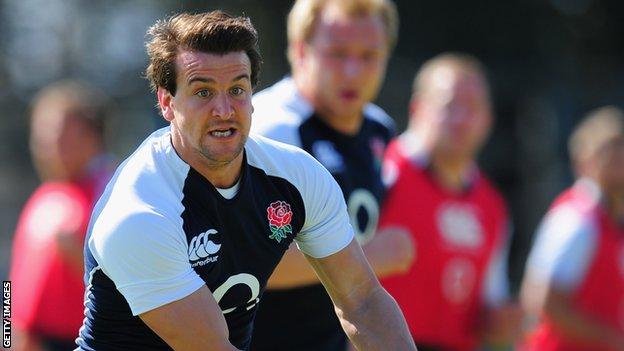 Dickson looks set to compete with Leicester's Ben Youngs for the starting position to face Australia next month.

"Fingers crossed he will be among it," Fotuali'i told BBC Radio Northampton.

"Hopefully he will get a start for England. I would pick him as England's first number nine at the moment the way he's playing."

Dickson, 28, has shared scrum-half duties with Fotuali'i since the Samoa international, considered to be one of the best nines in the world, arrived from Ospreys in the summer.

And Dickson, who has been capped nine times, limited Fotuali'i to an appearance from the replacements bench for last weekend's Heineken Cup victory over the half-back's former Welsh region.

That will most likely mean Dickson will be vying with 24-year-old Youngs, who is capped 33 times, for the clash with the Wallabies on 2 November, with places up for grabs in the subsequent matches against Argentina and New Zealand.

"Lee is a credit to himself and has put in the hard work," added Fotuali'i.

"Training-wise he is out there doing the extras - passing, kicking. We both do the same and feed off each other.

"We learn off each other. Well, I learn off him and hopefully he learns from me."