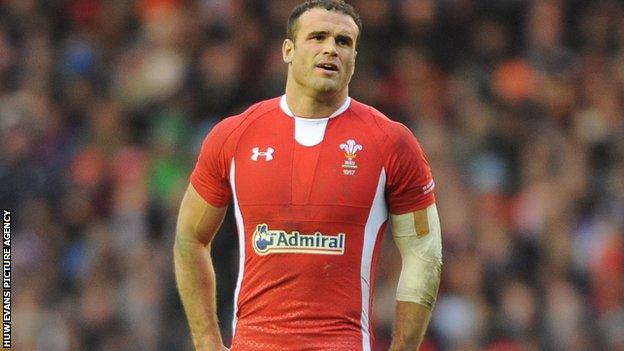 Centre Jamie Roberts says his goal is to be selected for the Six Nations after injury saw him miss out on the Wales squad for the autumn Test series.

Roberts, 26, damaged his ankle in Racing Metro's 19-16 defeat of Perpignan in the Top 14 clash in Paris in September.

He was not named in Warren Gatland's Wales squad for the Autumn Test series on Tuesday.

"That [the Six Nations] has to be my goal now," said Roberts.

Missing out on selection means it will be hard to watch but ultimately...it will drive me to be a better player.

"Missing out on selection means it will be hard to watch but ultimately... it will drive me to be a better player.

"If those guys do well in the autumn, that will drive me to train harder to get selected for the Six Nations squad."

In-form Williams is tipped to replace Roberts in the Wales midfield alongside his Scarlets team-mate Davies.

Roberts is philosophical about missing out on Wales squad selection for the first time since a wrist injury ruled him out of the autumn series in 2010.

"I am injured and I will miss out and that is professional sport," said Roberts.

"As of Friday, I will be six weeks post operation and I am probably another four or five weeks away from playing.

"I am likely to be fit by the end of November, the doctors tell me.

"I just have to keep working hard, keep rehabbing well and keep being really diligent with my rehab.

"I hope to get back on the field as soon as possible. All I can do is try to get myself as fit as I can.

"If I am needed for international selection, so be it, but I just have to get my head down and train hard and get back fit and see where I am in mid- November."

Roberts, a member of the victories British and Irish Lions party who earned a series win in Australia earlier this year, had only played three games for Racing before being injured.

He scored a try in the Lions' 41-16 third Test victory over Australia in Sydney to clinch a first Test series win for 16 years.

But Roberts, who qualified as a doctor before moving to Paris from Cardiff Blues in July, acknowledges Wales has some real depth with a batch of new young centres establishing themselves with the regions.

"Cory and Owen are two young centres at the Blues who have been knocking on the door for quite a while.

"With their opening games of the season with the Blues, they attributes that will thrive on the international stage.

"Then there is Ashley Beck, who has played well for the Ospreys and we all know what a talent he is."