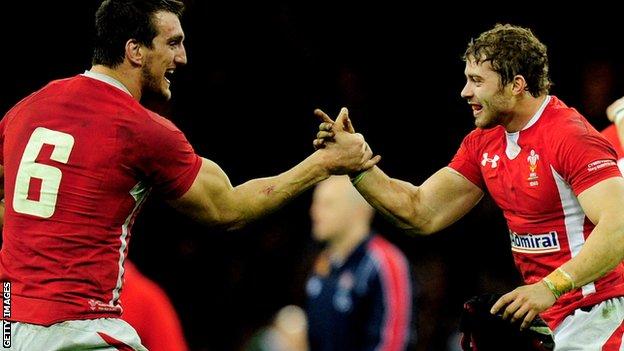 The Welsh Rugby Union has offered to help the four regions keep their leading Welsh players in Wales.

The WRU would employ all of the regions' leading Wales players whose deals expire in 2014.

Wales captain Sam Warburton is among those out of contract next summer.

"It is important that any player considering his future right now fully understands the level of support the WRU is prepared to offer," said WRU chief executive Roger Lewis.

The governing body said regions had expressed concerns about their ability to conclude their own negotiations with leading players amid uncertainty over the future of the principal European club competition, the Heineken Cup.

The WRU adds that once the negotiations regarding the European tournament are concluded the agreed player contracts would revert to the regions.

Its offer came as a European Rugby Cup Limited (ERC) meeting for stakeholders was taking place in Dublin on Wednesday, a meeting representatives of the English and French clubs said they would boycott.

BBC Wales Sport understands that Stuart Gallacher, the chief executive of Regional Rugby Wales, the umbrella organisation for the Welsh regions, did not attend the meeting either.

They claim the revamped tournament offers "significant advantages", but the WRU opposes the new European competition.

Players' agent Tim Lopez, who represents Wales and Lions full-back Leigh Halfpenny, has already warned that some players are waiting to see what happens before deciding their futures.

Halfpenny and Cardiff Blues and international team-mate Warburton are out of contract at the end of the season.

Scarlets captain Jonathan Davies plus Ospreys trio Alun Wyn Jones, Adam Jones and Ian Evans are also out of contract in the summer.

Lock Evans has stated he would consider leaving the region if they were not competing in the Heineken Cup.

A number of leading players have left Wales in recent seasons to join richer French and English clubs and the WRU wants to ensure more do not follow.

"I want to make it clear to our players that we have full confidence in the future of the elite game in Wales," WRU chief Lewis added.

"It would be inappropriate to go into details about any negotiations or discussions which rightly have to be concluded in private.

"But I respect the concerns of the players at a time when our talks on Europe are continuing.

"Our squad is about to embark on a demanding autumn series of international games and it is vitally important all of their minds are completely focused on the task in hand.

"I shared this proposal with the regional chairmen on Monday of this week and look forward to what I expect would be a positive response."