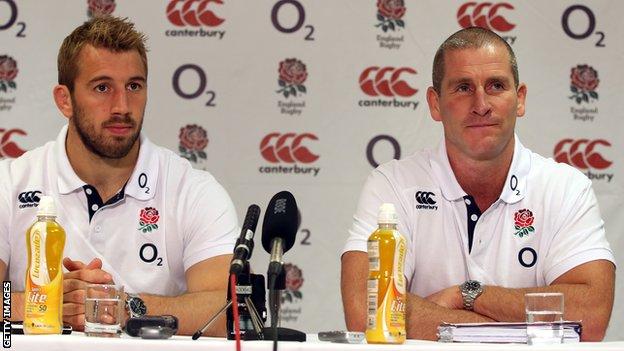 Stuart Lancaster says Chris Robshaw was right to step away from rugby over the summer even though it threatened to cost him the England captaincy.

Robshaw opted to rest rather than tour Argentina with Lancaster's squad.

But he has been reinstated as skipper for the autumn internationals against Australia, Argentina and New Zealand after holding off Tom Wood's claims.

Head coach Lancaster said: "It was the right thing to do. The pressures of captaining club and country are big."

He added: "When I looked at him and spoke to him at the end of last season, while he was willing to go on tour, I felt a physical and mental break was important for him. And he's come back refreshed, to take on the role again.

"We spoke about the end of the season, to give him some areas to develop. One was his foot speed over the floor, and his ability to change his pace.

"He's worked on those. Harlequins have done a good job and he looks in great shape. To have a big back row in the modern game is handy, so he's got physicality as well, but I think he's a bit more dynamic as well."

Robshaw had been omitted from the British and Ireland Lions squad that secured a historic series win down under, and then had to watch as Wood captained England to win in their own series in Argentina.

But Lancaster feels that process has left him in a better position as Australia come to town.

The coach said: "It obviously hurt him. But it happened at a time when he had the opportunity to get away from rugby. To be able to get abroad, get some sun on his back, reflect on what he'd done over the last 12 months… I think he came back having put it to bed and moved on.

"He's had to fight to get in the England side, and he knows nothing will be taken for granted. And he's had disappointments in the past, and fought back from them."

Lancaster will finalise his team for Australia's visit to Twickenham on 2 November after training next Tuesday, although it seems certain that Billy Vunipola will win a first start at eight.

The coach was also fulsome in his praise for Northampton scrum-half Lee Dickson, which suggests Ben Youngs might not be guaranteed the starting role at nine.

"Everyone has to be playing at the top of their game to get picked," he said. "We could have lads who have been away on Lions tours wondering now if they're going to get picked."

Neither was Robshaw given any assurances about the captaincy when he opted to miss the summer tour.

But Lancaster made it clear that, once he came through the weekend's games unscathed, the Harlequins flanker was his clear favourite to resume the role.

"I gave him the assurance that if he was playing well enough he'd get picked, and then I'd make the captaincy decision after that," revealed Lancaster.

"But experience matures players and captains. It'll help him deal with the on-field situations you face as captain.

"You've talked about Tom captaining the side - the two times he did it in Argentina are the only times he's done it. It's a big ask to then ask someone to make all those on-field decisions and to get them right, to get a feel for the game as well as concentrate on your own game. It's a different skill.

"When you're captaining England, there's a bigger role to play than just purely the on-field decision making. Chris's experience in doing it over the last 12 months will help him - it's a case he's had more time doing it and he'll be better this time around.

"If you put together the likes of Geoff Parling, who obviously went on the Lions tour and took the leadership role, Tom Wood, who's captained England, Dylan Hartley, who captains his club, and Lee Dickson's captained his club, Toby Flood's captaining his club… we've got players in there with a range of experiences, and that's what you need in a team."

Robshaw, however, is guaranteed little beyond this autumn. Lancaster insists his skipper has the role only for the next three games, not least because of the young open-sides who are expected to push the incumbent hard.

The 27-year-old has sometimes been denigrated as a 'six and a half' rather than a specialist open-side, although his coach believes some of that criticism should be borne by those around him.

"We have young players who are more in that (specialist) sort of mould - Matt Kvesic, obviously, Will Fraser, Luke Wallace - but we need a little bit more consistency from them in order to justify picking one of them ahead of someone like Chris."