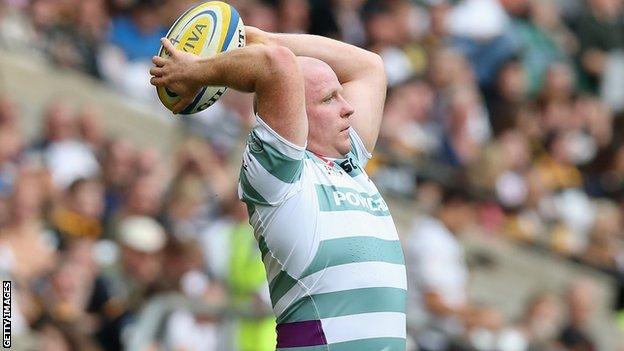 The Scotland hooker has endured a tough start to his Falcons career, missing several months because of a broken thumb picked up in a pre-season game.

They've evolved the playing squad a lot. We struggled last season but now they are a solid unit that has picked up points without really playing well

He made his Falcons debut last weekend in the Challenge Cup defeat at Brive.

"The Brive game was great to get ready for the bread and butter of the league and Irish will be difficult," he said.

"Obviously we didn't get the result we wanted but away games in France always have a fantastic atmosphere so it's good experience for the lads that played."

Newcastle go into the weekend's game on nine points alongside Irish, Gloucester and Wasps, and seven points above bottom-of-the-table Worcester.

Last term Lawson was part of the Exiles squad that finished ninth in the Premiership after being locked in a relegation scrap for much of the campaign.

Since then, director of rugby Brian Smith has overhauled the playing staff by adding 12 new players to replace the 14 that have moved on.

Despite missing the first six weeks of the season with injury, Lawson was named in the Scotland squad for the autumn internationals and will hope to add to his 38 caps.

"I know how hard a game Irish will be because they're a lot different to the squad I was a part of that really struggled," Lawson told BBC Newcastle.

"They've evolved the playing squad - not unlike Newcastle have since relegation [in 2012].

"Now they are a solid unit with a very strong backbone, especially in the back row. They've realised how important it is to be tough in this league and have gritted points out without playing well."