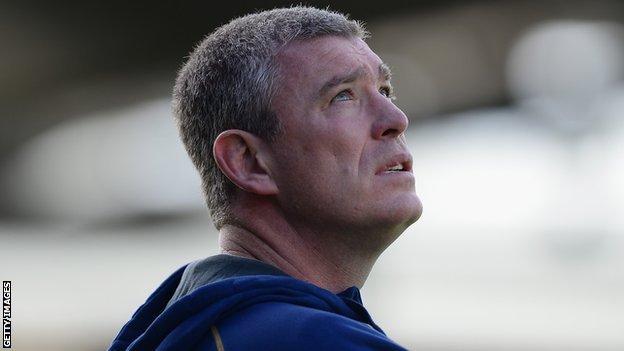 Former Gloucester coach Ryan's reign has not got off to a good start, Warriors having lost all five Premiership games under him so far.

But Cameron told BBC Sport: "Dean has made a long-term commitment to the club and is totally committed to that.

"He is a fantastic coach, one of the best directors of rugby in the league."

The appointment of Ryan, 47, was announced in mid-April, 12 days before local businessman Cameron was brought in as the club's chief executive, to replace departing managing director Charlie Little.

By then, eight of the 13 deals Worcester did for new players this season - for stand-off Paul Warwick, winger Paul Stephenson, Argentine trio Ignacio Mieres, Leonardo Senatore and Augustin Creevy, and forwards Ofa Fanga'anuku, Mike Williams and Paul Andrew - had already been done.

And, to an already worrying backdrop of falling attendances at Sixways, Cameron warns that the downward spiral which started towards the end of last season, when Worcester lost their last five matches, may take longer to turn round than they had hoped.

"Unfortunately, the job he's got to do there is massive, in terms of changing the team, and changing the culture in the team," continued Cameron.

"It might take a while for that to come through. It's obviously a risk if we keep performing like we are.

"But I met the Sale chief executive when we played them last Saturday and they went through something similar a year ago when they lost seven matches on the trot."

Ryan has already warned that, if performances remain sub-standard, then he may have to look for fresh blood - but only if he can find new players who can improve on the squad he already has at his disposal.

"There hasn't been one player available that will enhance this group significantly," said Ryan. "If we go down that road there's a danger that we repeat this three-year cycle and end up in the same place.

"The challenge of sorting this club out is making sure we get through this season without making decisions which compromise us in future years.

"When I came to this club and spoke to the board, I said I would make the right decisions for what this club will look like in the future and work hard to get the best out of this group in the short-term.

"Those two things are ongoing. If we get it right it will be the most rewarding thing I've ever done in my life."