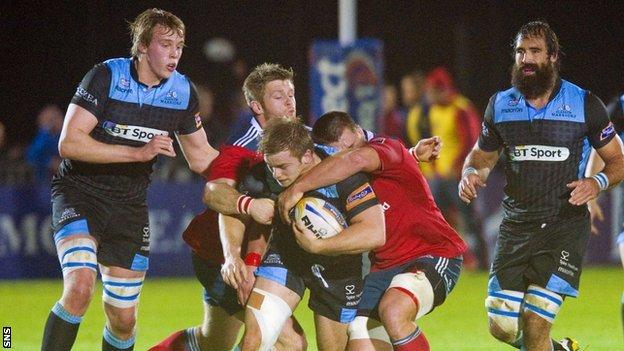 Munster celebrated a hard-fought win over Glasgow by replacing the Scots at the top of the RaboDirect Pro12 table.

Duncan Weir's brace of penalties had the Warriors 6-3 ahead at the break.

But Munster back JJ Hanrahan pierced the home defence for the game's only try and his precision with his right boot put the Irishmen in charge.

Glasgow tried hard to save their 100% record in the competition this season but they could not produce the killer move to penetrate the Munster defence.

Weir, in for Ruaridh Jackson at stand-off, scored an early penalty to take his Pro12 points tally to 400.

And he could have doubled Glasgow's advantage when Munster were penalised for coming in from the side. However, his long-range effort clipped the outside of the post and went wide.

The visitors were awarded a penalty of their own and Hanrahan smacked an almighty kick from the halfway line to level after 20 minutes.

Glasgow enjoyed some free-flowing rugby for a short while, with Byron McGuigan and Sean Lamont making impressive incursions into the Munster half before one of the visiting players used his hand to scoop the ball out of the middle of the scrum.

The crowd looked on as Weir put Glasgow 6-3 ahead with a straightforward penalty.

Chris Cusiter captained the Warriors in the absence of lock Al Kellock and his quick decision-making set up two good attacks in succession, first by Sean Maitland and Tim Swinson, then through Weir and Mark Bennett, the latter recently called up to the Scotland training squad for the autumn Tests.

Munster skipper Peter O'Mahony had the men from the south of Ireland moving into Glasgow territory with intent but too often his team was penalised for taking a shortcut when they became involved in the rucks created by the Scots' aggressive tackling.

This kept Weir busy with his trusted right boot and, in conjunction with Glasgow having the better of the exchanges at the line-outs, Gregor Townsend may have been disappointed that the half-time advantage was a mere three points.

Any sense of regret deepened when Munster went ahead within a few minutes of the restart. They had the put-in at a scrum when Glasgow were penalised for a knock-on and quickly worked the ball out to the right.

Hanrahan evaded a series of half-hearted tackles and darted in at the post for the first and only try of the game. His conversion from wide on the right was almost as impressive.

And the complexion of the game changed further when Tyrone Holmes gave away a penalty in front of the posts, far too inviting for Ireland Under-20s star Hanrahan to miss.

Glasgow responded well to being 13-6 down and pressed Munster to within a metre of their own try-line, with 19-year-old second-row forward Jonny Gray in among the black and blue-shirted players trying to level the score.

Welsh referee Ian Davies showed a yellow card to James Cronin for foul play as tempers frayed and Glasgow chose to go with the scrum, which they had edged in the previous 50 minutes, rather than kick for three points from close range.

Josh Strauss had three attempts to cross the line and Swinson one, but the outnumbered Munster side defended manfully.

In a pause in the attack, Holmes, Bennett, Ryan Grant and Cusiter made way for Jerry Yanuyanutawa, Niko Matawalu, Chris Fusaro and Argentine centre Gabriel Ascarate.

However, Munster withstood the next wave of pressure and the home fans began to contemplate their 10-game winning streak at Scotstoun being ended.

Glasgow fans' favourite Matawalu had the 5,726 crowd on their feet with a trademark darting run before he was flattened and Weir added to the sense of a fightback with a marvellous kick to within two metres from inside his own half.

The Warriors failed to capitalise on that, though, and there followed a tense period when the tackling intensified and Glasgow probed the red line knowing that should they concede again they would be beyond a converted try to draw the match.

Matawalu became the focal point of the increasingly desperate Glasgow attacks and despite four minutes of constant attacks in added time they could find no way past a determined Munster defence.

Not Used: B Holland, Sheridan, Earls.