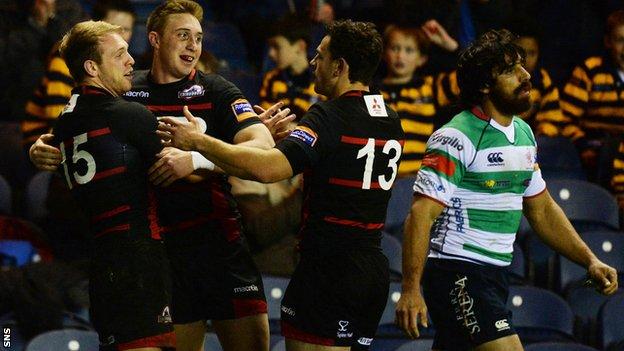 Edinburgh picked up their second win of the Pro12 season by beating Treviso in a mediocre match.

Greig Tonks scored a first-half try and Willem Nel added one after the break, with Greig Laidlaw kicking both conversions and two penalties.

Treviso stuck to their task and were worthy of the losing bonus point.

Luke McLean's second-half try was converted by Tobias Botes who, along with James Ambrosini, also kicked a penalty for the visitors.

Edinburgh, who move to 10th in the RaboDirect Pro12, dominated territory and possession but individual errors made for a difficult night.

The hosts made a focused start from receiving the kick-off but when their success in retaining the ball through many phases seemed to be on the point of reward, Laidlaw lost the ball forward in going over the line.

However, Edinburgh were not deterred and further crisp passing ended with flanker Dimitri Basilaia putting full-back Tonks over in the corner. Harry Leonard converted from touch.

The game had already been rendered stop-start by a series of injuries before Edinburgh's high scoring winger Tim Visser went down, tackled in midfield, and referee Alain Rolland immediately stopped play.

After a prolonged break, Visser was taken from the field on a stretcher - and his involvement in Scotland's forthcoming autumn internationals looks highly doubtful.

Edinburgh continued to dominate possession but were let down by errors when they entered the danger zone.

Treviso had the chance to pull back three points; Edinburgh failing to release visiting full-back Brendan Williams when his dodging run was stopped - but Ambrosini's kick missed.

However, the Edinburgh drop out was charged down, Treviso remained on the attack and when Edinburgh went offside Ambrosini slipped the easy kick home.

Another Edinburgh attack foundered on an error but Treviso brought down the resulting scrum so the half finished with Laidlaw's penalty and the hosts went in leading 10-3.

Edinburgh raised the level of second-half play and were rewarded with a penalty kicked by Laidlaw.

Soon after, Treviso drove a lineout and the subsequent pressure ended with a try from McLean, converted by Botes.