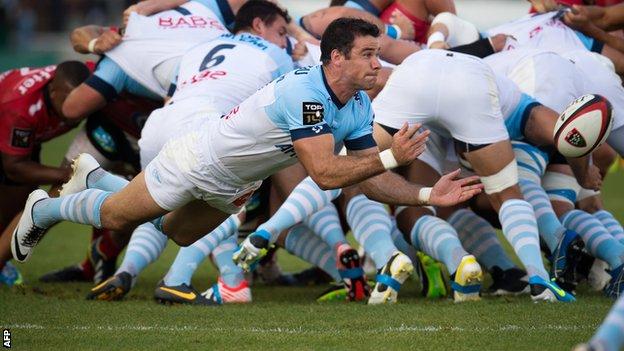 The scrum-half has been suspended and his future at the French club is in doubt following an alleged breach of discipline involving alcohol.

"Sacking him will free up a lot of euros and ease the pressure of having to lose him during international duties," Williams wrote on Twitter.

Mike's commitment to the club cannot be questioned

"It also takes the pressure off the team for their poor league position."

He added: "Mike's commitment to the club cannot be questioned having played over 70 games in two-and-a-half seasons.

"You can also include a (successful) Lions series, Grand Slam and (Six Nations) Championship in that time. Would leaving Bayonne be a bad move for Mike?"

Phillips, who joined Bayonne after the World Cup in 2011, appeared before the club's board on Tuesday to answer allegations he turned up to a video analysis session under the influence of alcohol.

Team-mates Dwayne Haare and Stephen Brett also had to answer allegations at that meeting, and were fined but not suspended.

He has been left out of the match-day squad for Friday's Top 14 game against Montpellier but Bayonne have condemned media reports in France that claimed the 31-year-old has already been sacked.

Wales coach Warren Gatland showed support for the 77-times capped player when he named him in a 35-man squad earlier this week.

"We will just sit down and have a quiet chat about where his head's at and what he's doing," said Gatland. "But there will be no sanctions for him here in this set-up."

Phillips was suspended by Bayonne last year for off-field misconduct and by Wales in July 2011 after a confrontation with a doorman in Cardiff city centre.