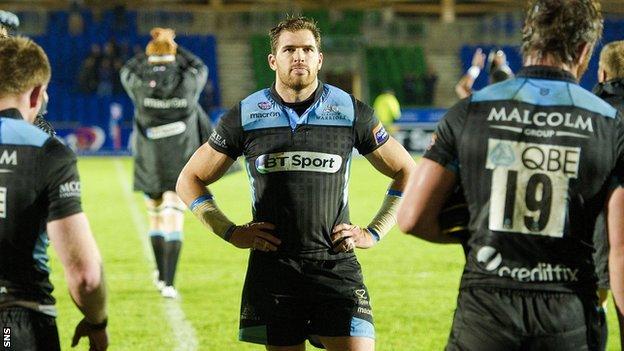 Glasgow Warriors head coach Gregor Townsend acknowledged the resilience of Munster after the Irish side triumphed 13-6 at Scotstoun.

Two Duncan Weir penalties meant Warriors led 6-3 at half-time, but JJ Hanrahan's try after the break put the visitors on course for the win.

"Over the last 10-15 years the best club side in Europe at holding onto a lead has been Munster."

Glasgow's 100% record in the RaboDirect Pro12 this season is therefore broken and they drop to second place after being usurped by Munster.

"We obviously dropped a few balls in the first-half, made a couple of defensive errors in the second-half, and that was enough to put Munster ahead.

"I thought in the first-half we were playing well enough to win the game and we just needed to kick on in the second-half, but we weren't capable of that."

His charges did do their best to draw the match at the very end though, driving forward looking to cross the line as the visitors defended stoutly.

"Munster were throwing their bodies into the tackle," added Townsend.

"So fair play to them, they put their bodies on the line. It wasn't for the win, it was for the draw, so it would've been one more point.

"I was proud of the boys' effort for almost forcing that equalising try."