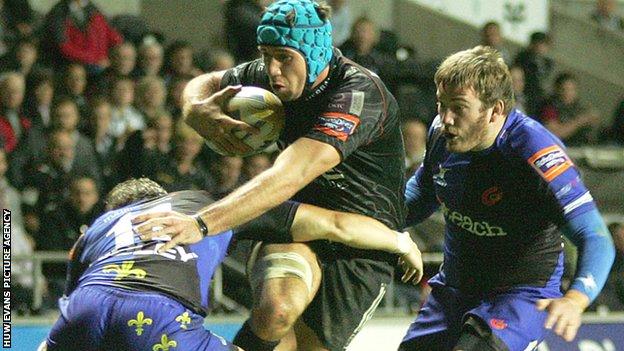 Justin Tipuric says the Ospreys owed a win to their fans after a disastrous start to their Heineken Cup campaign.

The bonus-point win ended a run of three consecutive defeats, including Heineken Cup losses against Northampton and Leinster.

"It's been a hard two weeks to be honest, we've been so frustrated that we've let ourselves down," said Tipuric

"We've let the fans down, let the coaches down. And it's been a hard two weeks and we've just had to get down [to] working hard."

Tipuric was named man of the match after rounding off a break by Matthew Morgan to claim his first try, before scoring a superb individual touchdown in the second half.

"I think their first two tries were probably from individual genius," said the former Wales international.

"Matthew Morgan taking advantage of a miss-match with a fantastic break and Tipuric - everything he touched tonight turned to gold."

Tipuric, however, said the win owed as much to sweat as it did to flair.

"It's been a hard two weeks and we've just had to get down working hard," he added.

"There's been so much extra training individually which has got us this win."