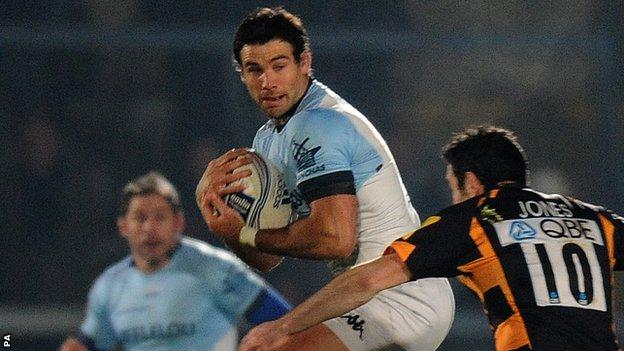 Wales scrum-half Mike Phillips has been sacked by his club Bayonne after being accused of turning up for training drunk.

Phillips, capped 77 times by his country, met club officials on Saturday and was told his contract was to be cancelled.

The 31-year-old will receive official confirmation by letter on Monday.

He left for Wales on Sunday to join up with the national squad ahead of the November internationals.

Phillips appeared before the Bayonne board on Tuesday to answer allegations he turned up to a video analysis session under the influence of alcohol.

Two fellow players, New Zealand back row Dwayne Haare and fly-half Stephen Brett, also had to answer allegations at that meeting and were fined but not suspended.

Phillips was left out of the squad for Friday's Top 14 game against Montpellier, which Bayonne won 24-19.

On Thursday evening Phillips had apologised in French to Bayonne fans "for this situation" on his Twitter account, adding: "I am behind the team wholeheartedly tomorrow night. Good luck."

The British and Irish Lions scrum-half was suspended by Bayonne last year for off-field misconduct and by Wales in July 2011 after a confrontation with a doorman in Cardiff city centre.

Bayonne have not yet officially confirmed the departure of Phillips, who played 39 matches in the Top 14.

Wales coach Warren Gatland showed support for the 77-times capped player when he named him in a 35-man squad earlier this week.

"We will just sit down and have a quiet chat about where his head's at and what he's doing," said Gatland. "But there will be no sanctions for him here in this set-up."