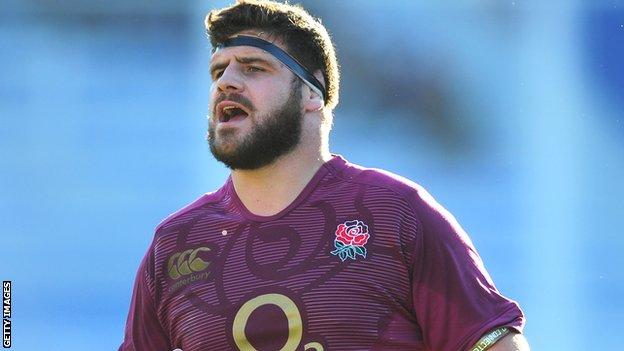 England have added front row forwards Rob Webber and Henry Thomas to their squad for Saturday's opening autumn Test with Australia at Twickenham.

Bath hooker Webber, 27, is included as injury cover for Dylan Hartley who has been troubled by an ankle problem.

Sale prop Thomas, 21, is brought in as Bath's David Wilson has a calf injury.

Both Webber and Thomas toured Uruguay and Argentina with England in June and are promoted from the England Saxons.

Webber scored in the 51-25 second Test victory against the Pumas in Buenos Aires, while former England Under-20 forward Thomas made his Test debut as a replacement in the 32-3 win in the first Test in Salta.

Having secured their first away series success against Argentina for 32 years, England tackle the Pumas again on 9 November before completing their autumn programme with a match against the All Blacks a week later.

It will be Argentina's first match at Twickenham since 2009 when a late try from Matt Banahan helped England to a 16-9 win, while world champions New Zealand suffered a surprise 38-21 defeat against Lancaster's side in last year's autumn series.