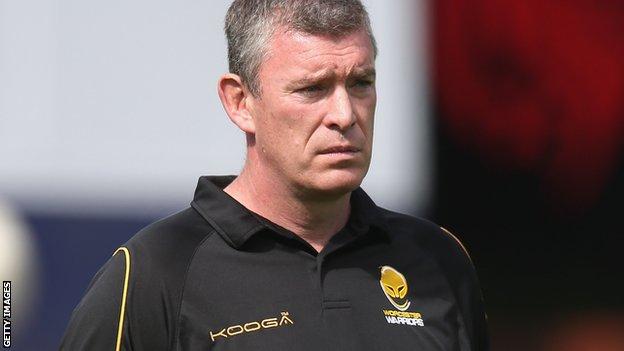 Worcester director of rugby Dean Ryan says they have not discussed relegation despite being eight points adrift at the foot of the Premiership table.

Warriors were beaten at the weekend and have now lost all six league matches this season.

"Relegation hasn't been mentioned yet," he told BBC Hereford & Worcester.

If there is someone out there who has the answer to all our problems then please, do come and let me know

"We've had six games. There's 16 left and there are two clubs just ahead of us on 10 points - relegation shouldn't even be part of the conversation."

In a summer of upheaval at Sixways, the former Gloucester boss was amongst a raft of changes.

Carl Hogg was brought in as head coach whilst backroom staff

"This is not a one-week job, the reality is we are not at the same stage as the rest of the clubs in this league," Ryan continued.

"We are putting things in place for the long-term to change the whole culture of the club but at the same time trying to plug the gap in matches every week.

If Worcester lose to Bath on Friday night it will be the worst losing Premiership run in almost 15 years, since Bedford suffered 12 straight defeats between October 1998 and January 1999.

"The players are giving everything so I have no complaints there."

The loss against Exeter was the Warriors' 11th straight league defeat and takes their winless run in all competitions to 13 matches.

In addition, it was the heaviest defeat for any team so far in this season's Premiership and a second successive game in which they have failed to score a try.

"I can remember playing Exeter 10 years ago and running straight over the top of them," added Ryan.

"Exeter have had their systems in place for four or five years. They were patient and built to the point they are at now. We're not ignorant of the fact that we're bottom of the table, but the players are giving everything.

"But if there is someone out there who has the answer to all our problems then please, do come and let me know."