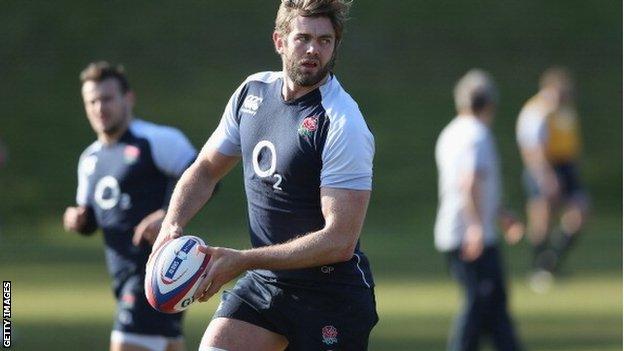 Rugby league convert Joel Tomkins is set for an England debut against Australia at Twickenham on Saturday - but head coach Stuart Lancaster will be without lock Geoff Parling.

Uncapped Saracens centre Tomkins, who switched codes in 2011, has been retained in Lancaster's 23-man squad.

But Lions second-row Parling suffered mild concussion during training on Tuesday and has been ruled out.

Bath's Dave Attwood, who only returned from a rib injury last week, will supply second-row cover from the bench for the opening autumn Test against the Wallabies.

Leicester Tigers' Parling will stay with the squad, however, and is expected to return to training ahead of next week's Test against Argentina at Twickenham.

Parling joins prop Alex Corbisiero on the injured list after the the Northampton man sustained a knee injury a fortnight ago.

Lancaster will have to choose between Ben Youngs and Lee Dickson at scrum-half after Danny Care was released, while Ben Foden was retained in the squad following his impressive two-try display for Saints against Saracens.

"It's never easy deciding who to select and that's what you want, players pushing hard for places across the board," said Lancaster.

"We have had two good days of training here at Pennyhill Park and, added to last week in Leeds, we are in good form and looking forward to the game."