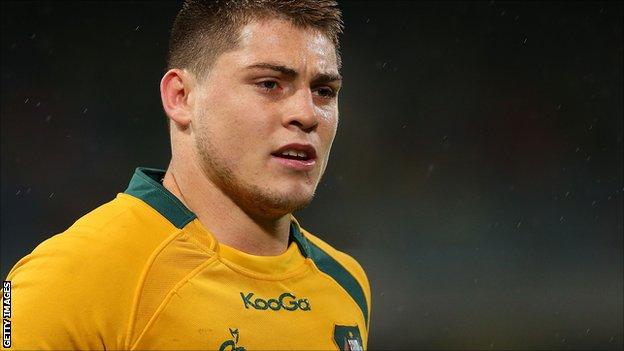 London Irish are set to announce the signing of Australia back James O'Connor on Tuesday.

The Premiership club have called a news conference for 10:00 GMT where the 23-year-old is expected to be unveiled.

O'Connor has been allowed to move to England after the Australian Rugby Union terminated his contract following a string of off-field incidents.

The outside half, who can play anywhere along the back line, was told he would not be offered a contract with Australia for 2014 after a disciplinary investigation found he had "failed to uphold the behavioural and cultural standards expected within the team".

Earlier this month he was escorted from Perth airport for drunken behaviour.

O'Connor tweeted on Saturday that he was excited by the challenge awaiting him in England.

"London bound for a few months to play some rugby, can't wait.. see you soon Aus! Thanks for all the support guys - appreciated," wrote the Australian.

Australia are about to embark on a tour of Europe, with the Wallabies playing England at Twickenham on Saturday as they bid to complete a Grand Slam (beating England, Scotland, Ireland and Wales on the same tour) on a trip that also includes a Test against Italy.