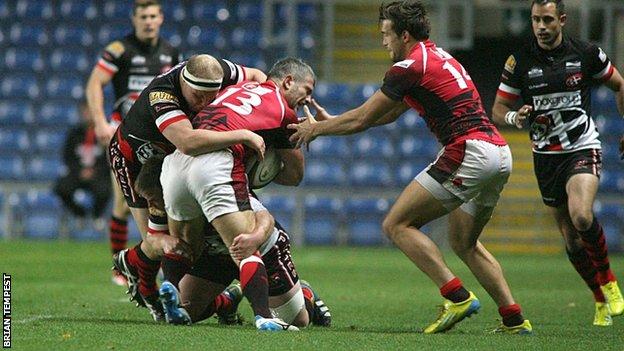 Cornish Pirates head coach Ian Davies said his team's 41-6 defeat by London Welsh did not come as a major surprise.

The Pirates went into the game in good form, having recorded bonus-point wins in both the Championship and the British & Irish Cup.

But the Exiles, relegated from the Premiership last season, had too much for a youthful Pirates side.

"I said at the start of the season that it'll be a rollercoaster," Davies told BBC Radio Cornwall.

"Everyone's got a bit carried away with the bonus-point wins in the last few weeks but we've got to be realistic.

"I don't think the score fully reflects the game but London Welsh fully deserved the win."

I don't think you can question the endeavour of the players

The Pirates made a shift in their recruitment policy for this season, targeting younger players with Cornish connections and Davies told BBC Sport South West in September that the club was taking a long-term view and realised results could dip in the short term.

"It has to be a good learning experience," added Davies.

"Obviously we want to win games but we're going to come to places like the Kassam and play really good teams. The boys have to understand why we made mistakes - it was just inaccuracy really.

"A couple of times we were inaccurate at ball transfer, the breakdown or in defence. No offence to the teams we played but in the B&I Cup against weaker opposition we got away with it - at the top end of the Championship you don't."

The average age of the Pirates line-up was six years younger than their opponents' and Davies admitted that the difference in the two teams' level of experience had been a telling factor at the Kassam Stadium.

"London Welsh are a former Premiership side and had 12 players with Premiership experience in their team - and we're not," said Davies.

"I don't think you can question the endeavour of the players but London Welsh were what we expected: ruthless, big and playing Premiership game in the Championship."