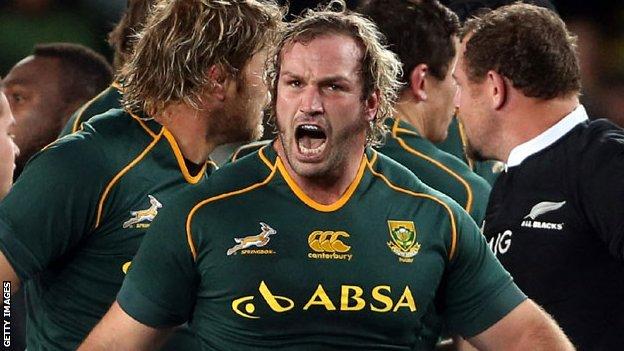 Prop Jannie du Plessis has been ruled out of South Africa's northern hemisphere tour, which kicks off against Wales in Cardiff on 9 November.

The 30-year-old has been ruled out because of a chronic shoulder injury and a hand fracture.

Uncapped Lourens Adriaanse has been added to the Sprinboks squad.

"But we're lucky to have someone like Lourens to step in.

"He's been part of the squad for almost the entire Test season and was one of the unlucky players to miss out on initial selection."

Toulon lock Bakkies Botha, 34, and centre Jaque Fourie, 32, return having last played for the Springboks at the 2011 World Cup.

Wales have not faced the Springboks since the sides met at the 2011 World Cup in New Zealand.

Warren Gatland's side clash and 11 Springboks who played that day are in Meyer's squad.

"It will be great to have Bakkies, Jaque and JP in the squad," said Meyer. "All of them are really excited to play for the Springboks again, they have heaps of experience and are world-class players.

"Scarra's inclusion, like that of [wing/full-back] Gio Aplon, is also just reward for continuous great form.

"He's still young and will learn a lot from our two front-line hookers, who both rate among the best in the world.

"Pieter-Steph missed a large part of the season because of injury, but has been exceptional since his return last month, while we've always rated Frans very highly and look forward to working with him again.

"And Louis has always been on our radar - he is only 23, fits in with the way we want to play and was impressive when he worked with us in June."

Meyer believes Wales will provide a stern challenge for the 2013 Rugby Championship runners-up, who will then play Scotland at Murrayfield on Sunday, 17 November before meeting France in Paris six days later.

"The Welsh have won the Six Nations the last two seasons," added Meyer. "It's our first test against them since the 2011 Rugby World Cup in New Zealand and they will be fired up at the Millennium Stadium.

"This year Scotland finished third in the Six Nations, and in our two tests against them in the last two seasons they have been a tough nut to crack.

"We're not expecting anything different at Murrayfield. We finish off against France at the Stade de France, where the Springboks lifted the Webb Ellis Cup in 2007.

"But we've not beaten Les Bleus in France since 1997 and will have to be sharp and focused."