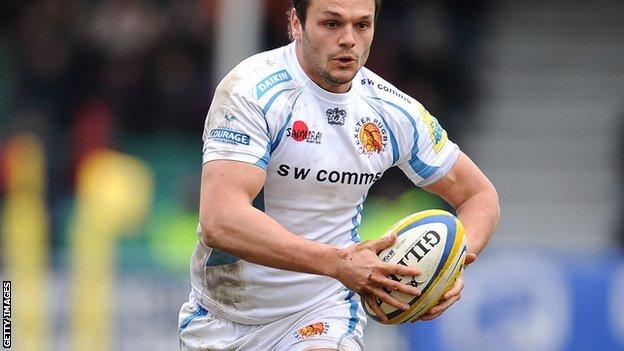 The 28-year-old is qualified for both Wales and England, but has yet to be called up by either country.

"I don't know what Test teams are looking for but he's absolute quality for us," he told BBC Radio Devon.

"He gives us that versatility to be able to gel people around him. Every time he plays he never lets you down."

Dollman, playing at full-back in the absence of injured Luke Arscott, scored his first try of the season in the Chiefs' 40-6 thrashing of bottom-of-the-table Worcester on Saturday.

"The biggest thing for me is he's a proper rugby player - a player who looks for space," added Hepher, of the former Wales Under-18 international who is also comfortable at centre and on the wing.

"He's not a guy who's built in the gym - he probably won't thank me for saying that - but he's a genuine rugby player on the field.

"When you see all those qualities week in, week out he's a real handful for the opposition."

Hepher also praised Tom Johnson's performance at Sandy Park, after the flanker was released back to his club by England.

England coach Stuart Lancaster will pick his side to face Australia in the first of his side's three autumn internationals and Hepher said Johnson deserved to be involved.

"He's going at it hard and pushed himself back in the reckoning," said Hepher.

"He's got to be right in the thick of it and hopefully we don't see him next week.

"Tom's been magnificent, he didn't let being released affect him at all."

Captain and lock Dean Mumm and flanker Ben White are joint top of the Premiership's try-scoring charts with four each already this season, and both crossed again against the Warriors.

"Dean has done fantastically well, we should have made him captain a year ago he's banging in that many tries!" joked Hepher.

"What we look for is an all-round team performance. So we don't necessarily get wingers who get 11 or 12 tries in a season but they all contribute so we look for tries across the board."