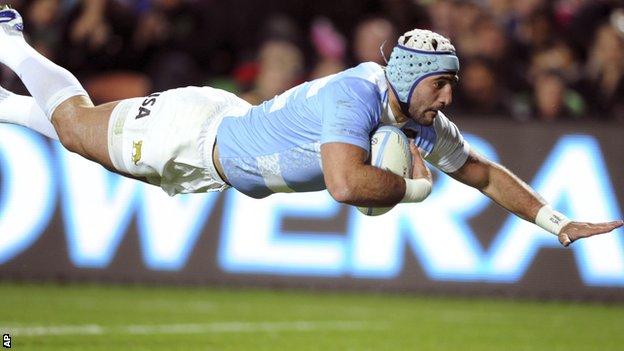 Back-row forward Juan Manuel Leguizamon will captain Argentina against England at Twickenham on Saturday in the absence of Juan Martin Fernandez Lobbe.

Fernandez Lobbe, 31, has been ruled out of the Pumas' three autumn Tests in Europe with a fractured elbow.

New coach Daniel Hourcade has made five changes from the team crushed 54-17 by Australia in the Rugby Championship.

Amorosino replaces the injured Juan Martin Hernandez, Fernandez takes over from the now-retired Felipe Contepomi, while Cubelli has been preferred to Martin Landajo, with both nines playing their club rugby in the amateur Buenos Aires championship.

Former London Irish number eight Leguizamon, who has won 52 caps. will also lead Argentina against Wales and Italy this month.

"We face three very tough matches and we must work to the full each week to be able to go into them in the best shape," said 30-year-old Leguizamon, who now plays for French side Lyon.

Fernandez Lobbe fractured his right elbow during Toulon's Top 14 defeat against Toulouse. He will have an operation and is likely to be out of action for three months.

The World Cup-winning coach will not return after two years in the role and will concentrate solely on a similar role with Super Rugby side the Blues.