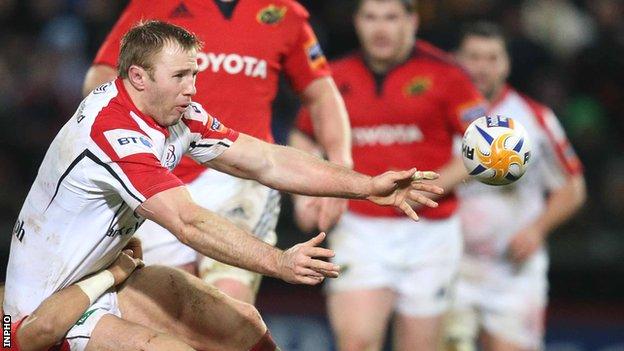 Ulster pair Roger Wilson and Andrew Trimble are among four players called into Ireland's squad for the games with Samoa, Australia and New Zealand.

Back-row Wilson and wing Trimble are drafted in by coach Joe Schmidt, along with Munster lock Donncha O'Callaghan and Leinster prop Martin Moore.

The quartet come in because of injury doubts over four players.

Munster lock O'Connell has a calf strain, while team-mate Earls will miss the rest of training this week because of a knee problem.

Ulster's Fitzpatrick is struggling with a calf problem and fellow prop Healy is sidelined with a knee cartilage injury.

Munster scrum-half Conor Murray is also a doubt after being cited for striking with the elbow during Friday's win over Glasgow.

If found guilty at Wednesday's hearing, Murray could be banned for eight weeks.

Ulster wing Craig Gilroy is among the players unavailable because of injury, along with Stephen Ferris, Tommy O'Donnell, Iain Henderson, Donnacha Ryan and Jordi Murphy.

Schmidt has yet to indicate who will captain Ireland in the autumn games.