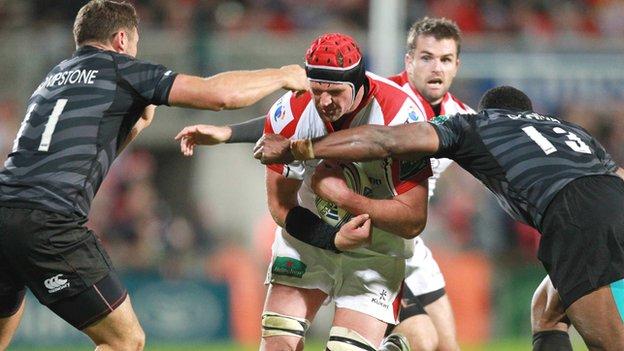 Ulster captain Johann Muller has been ruled out for four to six weeks because of a calf injury sustained in Friday's Pro12 victory over Cardiff Blues.

The South African lock was forced off with a torn calf muscle during the first half of the Ravenhill encounter.

Muller is set to miss the next month's Pro12 matches against the Scarlets, Edinburgh and Zebre.

However, he could return for the Heineken Cup clash against Benetton Treviso in Belfast on 7 December.

The return game against Treviso takes place the following week in Italy.

Ulster are just two points behind Pro12 leaders Munster following the 39-21 bonus-point victory over the Blues.

It was a sixth straight win for Mark Anscombe's side, who sit top of Heineken Cup Pool 5 thanks to victories against Leicester Tigers and Montpellier.