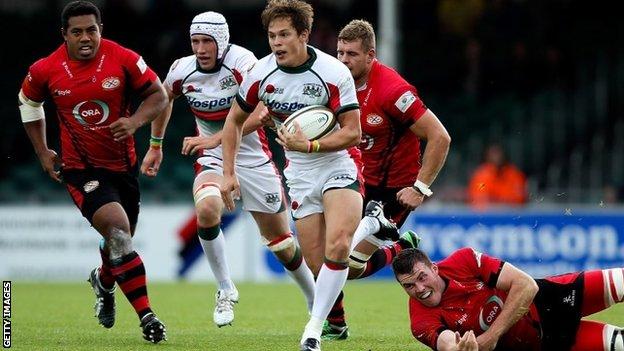 Plymouth Albion coach James Shanahan gave his players lavish praise after their 23-18 win over Jersey moved the club up to seventh in the table.

The hard-fought win was Albion's third in a row, and Shanahan took great pride in the display.

"It was by far our best performance of the season," he told BBC Radio Devon.

"It was a complete 80 minutes, we executed the gameplan and I thought our forwards were outstanding at a hard place to come."

Jersey's physical pack was seen as the home side's main strength before the game, but Albion successfully held off the threat at St Peter.

"Jersey have a big powerful pack, they attacked us up front but our set-piece play was very good and our defence was outstanding," said Shanahan.

"That led the way for us to get the victory we thoroughly deserved.

"Everyone says it every week about Albion's pack and how we're going to struggle and I don't think anyone backed us to get anything against Jersey, but I know what we have here and how hard they work.

"The first try was outstanding: we looked after the ball for four minutes from the kick-off and then scored under the posts - that was just great rugby.

"Overall it was a really good team performance and we managed the game really well."