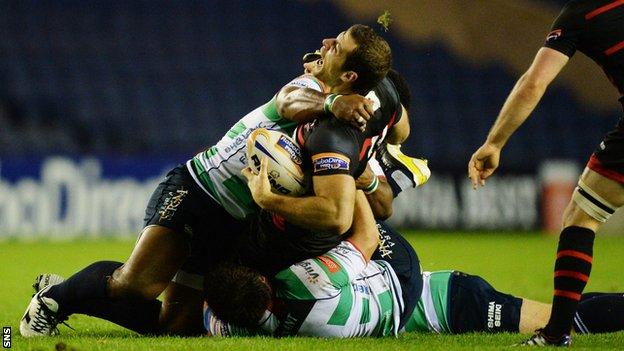 Scotland and Edinburgh wing Tim Visser will be out of action for up to four months because of a fractured fibula.

A scan confirmed the news after Visser, 26, was taken off during on Friday.

"We're very sorry he'll miss Scotland's autumn Tests. He's an asset for Edinburgh Rugby and Scotland. We all wish him a speedy recovery."

Who is Tim Visser?

Visser, who has won 12 caps, had already been ahead of next month's Test series against Japan, South Africa and Australia.

And the expected length of Visser's absence could place his Six Nations participation in doubt.

A 41-man Scotland squad gathered for training in Glasgow on Monday but Saracens back Duncan Taylor, who suffered an injury in his side's Premiership loss to Northampton Saints on Saturday, was also absent.

Taylor, 24, suffered abdomen and shoulder damage and is being treated by Saracens' medical team.

Scotland play Japan on 9 November and then South Africa on 17 November before meeting Australia on 23 November, with all three matches taking place at Murrayfield.