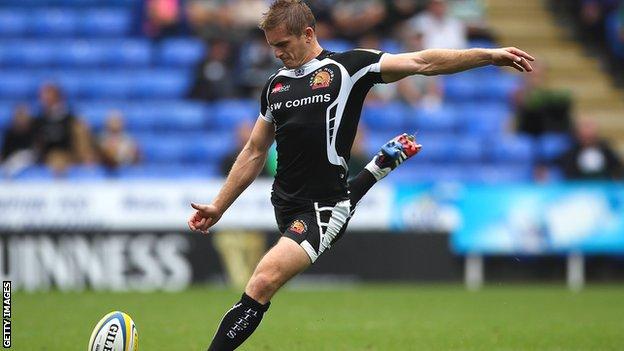 Gareth Steenson kicked all 18 points as Exeter Chiefs moved up to fourth in the Premiership table with a narrow two-point victory at Sale Sharks.

Cipriani and Steenson traded penalties with the clock ticking down, before a dramatic finish.

Mark Cueto finished off a great Sale move, with Cipriani adding the extras, but it was too little too late.

Sale made the stronger start but it was the visitors who got the first points with Steenson's penalty, before Cipriani's kick from wide left levelled the scores.

A 25-metre effort from Cipriani put Sale ahead, before Vadim Cobilas was sent to the sin-bin for repeated infringements at the ruck and Steenson took advantage with two successful penalties.

Cipriani put a penalty attempt wide, before a melee between both sides - which was reviewed by the TMO - saw Sale's Tommy Taylor shown a yellow card.

Steenson extended Exeter's lead to six points and referee Wayne Barnes then sent a third Sale player to the sin-bin, with Krill Kulemin being ordered from the field to reduce the hosts to 13 men for six minutes.

Exeter stretched their lead to 15-6 at the break with another Steenson penalty, while Cipriani's attempt at the other end fell short.

Cipriani closed the gap to six points with six minutes remaining, but Steenson hit back with his sixth successful penalty.

A free-flowing move from left to right saw Cueto go over in the corner and, once the try had been confirmed by the TMO, Cipriani kicked the extras from wide right.

It made it a two-point game but Exeter hung on for their fifth victory in seven matches, while Sale grabbed a losing bonus point.

"The referee had a good game and didn't get any help from his assistants. He was right on the yellow cards.

"An away win in the Premiership is a rare thing and they (Exeter) did well.

"They are a good side. They came and played a methodical game and played well and built the scoreline up. We reacted with ill discipline."

"It was a very important away win in the Premiership for us. We showed a lot of good qualities.

"I enjoy watching us when we get on the front foot but it's also satisfying to watch the boys stand and fight.

"The fixture could have slipped away from us like last year but we handled it a lot better."