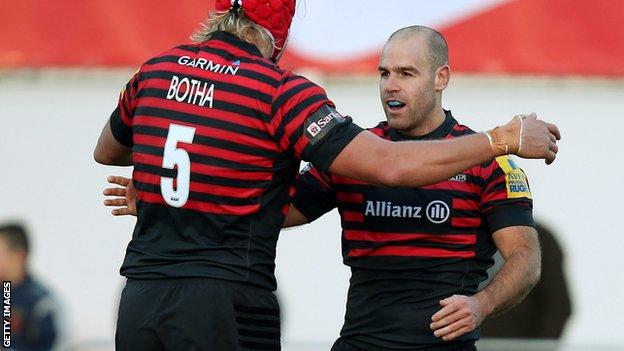 Phil Godman kicked the visitors into an early lead but Charlie Hodgson touched down and added a penalty of his own to give Sarries a 10-3 half-time lead.

And the hosts stepped up a gear in the second half, running in four unanswered tries to secure a convincing win.

Making his first start of the season, Charlie Hodgson scored 18 points to take him to 2,222 overall at the top of the all-time Premiership points-scorers list.

It was a formidable performance by Mark McCall's side, and a fine response having lost in the Premiership for the first time this season to Northampton a week ago.

Saracens, who were missing six players because of international call-ups, took a while to get into their stride and trailed to Godman's early penalty.

Home prop Matt Stevens was then sin-binned for an infringement at a line-out, but Newcastle failed to make the most of their numerical advantage and had their lead cancelled out when Hodgson broke through the Falcons defence to touch down.

The experienced fly-half, making his first appearance of the season, successfully converted his own try and then kicked a penalty soon after to extend the lead to seven heading into the break.

As the game wore on Sarries became a stronger proposition and with the hour mark approaching scored their second try when full-back Goode put a clever kick through for Strettle to go over in the corner.

A line-out drive then saw hooker George force his way over the line, although Hodgson's conversion attempt hit the upright for the second time in a row, before Goode added a fourth try after being set up by a combination of Hodgson and Will Fraser.

Strettle went over for his second in the final moments of the match to complete the scoring, with Goode's conversion taking Saracens up to the 40-point mark.

"It was the complete performance today. We had to build some foundations in the first 20 minutes into a very strong wind but overall we are very pleased.

"A lot of things which weren't very good last week were very good today. Our set-piece was outstanding, our scrum was good and to keep them try-less was important as our defence last weekend wasn't great."

On the returning Charlie Hodgson: "He looked like he'd never been away. "He hadn't played for two and a half months and to play that well was fantastic and showed what a class player he is."

"The second half will take a little bit of looking at. For 40 minutes they had one chance and scored and I thought we were in with a shout.

"We'd had a few more chances than them but you have to take your chances.

"If we had been more clinical we might have been points up rather than conceding a soft try but it's games like today that you learn from.

"Some of our boys fronted up very well but you have to keep your patience for 80 minutes and we lost that."