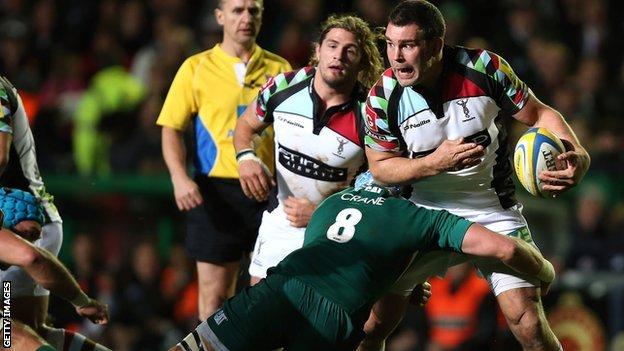 Owen Williams kicked a couple of early penalties for Leicester but Quins had the better of the first half and Nick Easter touched down to give the visitors a 10-6 lead at the break.

They are also without Dan Cole, Toby Flood, and Ben and Tom Youngs, who all helped England beat Australia at Twickenham on Saturday.

Matt Hopper finished smartly to extend the advantage soon after the interval.

However, it will be of little consolation to director of rugby Richard Cockerill, who has now seen his side lose twice in a row since returning from his nine-game ban.

With the wind behind him, Leicester fly-half Williams, deputising for England call-up Toby Flood, struck two fine penalties to give the Premiership champions an early advantage.

But it was Quins who spent the vast majority of the opening 25 minutes with ball in hand and camped inside the Tigers half, only for a host of handling errors to leave them frustrated and without a single point on the board.

It took Leicester 28 minutes to gain possession inside the visitors' 22, though the attack ended with Williams dragging a further penalty wide.

Following successive defeats by Saracens and London Irish, Harlequins successfully followed up their 24-3 win over Sale last week to record back-to-back Premiership wins for the first time this season.

Then, with half-time looming, Julian Salvi was sin-binned for an infringement at the ruck and Quins were at last able to make the pressure tell, as captain Easter forced his way over after an attacking scrum. Evans made no mistake from in front of the posts.

With Leicester still down to 14 men, Harlequins inflicted further damage just moments into the second half.

The reintroduction of Salvi sparked the Tigers into life and, after Williams kicked another penalty, only Ugo Monye's remarkable try-saving intervention prevented Ed Slater touching down.

Evans added another two penalties to give Harlequins daylight and confirm an impressive victory, although a last-gasp penalty try did ensure Leicester would at least have a losing bonus point to show for their efforts.

"If people run at you and you don't tackle them they win, and that's what happened.

"You have got to defend better than that, certainly in the first half. The sin-binning hurt us, they scored two tries in that period.

"But they ran hard and we did not get off the line and make our tackles. We let them play and they played very well and deserved to win. They wanted it more than us.

"They outplayed us. I am not going to accept that, that is not good enough for us. Some of our defence early in the game was embarrassing. They will see it on Monday, and we have to be better."

"We talked about the opening two minutes. We wanted to play into the wind and when you do that you are forced to play.

"Chris Robshaw never wins the toss, Nick Easter has won the last two so he is going to do the toss every time now.

"We played that opening two minutes exceptionally well, it showed we could play our own game."