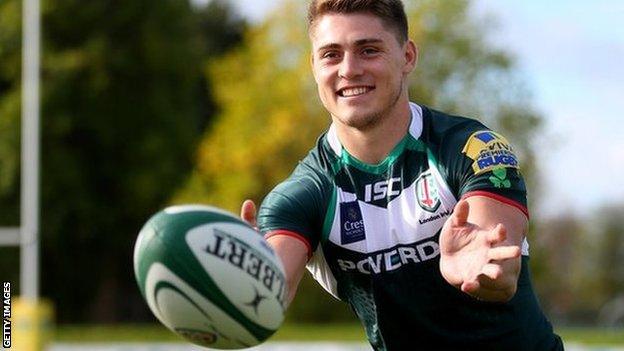 New London Irish signing James O'Connor says he hopes to rescue his career at the Premiership club after signing for the Exiles until the end of the season.

The back, 23, has played 44 Tests for Australia and is set to make his debut this weekend against Northampton.

O'Connor had his contract terminated by the Australian Rugby Union following a string of off-field incidents.

"This is an opportunity for me to knuckle down and play some quality rugby," he told BBC Radio Berkshire.

O'Connor was told he would not be offered a contract with the ARU for 2014 after a disciplinary investigation found he had "failed to uphold the behavioural and cultural standards expected within the team".

Australia are about to embark on a tour of Europe, with the Wallabies playing England at Twickenham on Saturday.

"I've made many mistakes and that is why I've got myself in this position, but I'm going to take the positives out of it," said O'Connor, who was allegedly drunk when escorted from Perth airport earlier this month.

"I've drawn a line in the sand and want to think about the future. The spring tour was taken off me and it will be tough watching the boys at the weekend, but I will be supporting them.

"This is the best place for me to move forward. London Irish have given me a second chance and I want to take it and play my rugby."

Exiles director of rugby Brian Smith, who returned to London Irish as boss after resigning from his position as attack coach with England, added: "James is a prodigious talent, a lot has happened in Australia and he has come over here to put that behind him.

"We want to look forward, and the key focus for James is to get his head ready for Sunday. We don't want him always looking over his shoulder. It's all been well documented and this is an opportunity for him to turn over a new leaf and crack on.